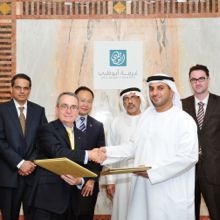 Australia this week confirmed a formal agreement with Abu Dhabi to promote the use of international arbitration to resolve business disputes.

The move will strengthen Australia’s position in the expanding market of international dispute resolution, argues the Australian Centre for International Commercial Arbitration (ACICA).

The memorandum of co-operation signed by the ACICA and the Abu Dhabi Chamber of Commerce and Industry (ADCCI) recognises the rapid rise in demand from global commerce for the fast, cost-effective and final resolution of disputes.

Professor Doug Jones AO, ACICA president and Clayton Utz head of major projects and international arbitration, said: “This agreement is a significant step in a strategic alliance between ACICA and the ADCCI. From ACICA’s position, we stand ready to assist the ADCCI to build on its significant reputation in the region.”

He said the agreement is also a basis for substantially raising the awareness in the Gulf Co-operation Council of the option of Australia as a neutral venue for hearing arbitrations resolving business disputes between trading partners in the Asia Pacific region.”

The ADCCI is one of the largest business chambers in the region, with offices for more than 25 public entities and private companies. Over 250,000 individuals and companies from within the UAE and abroad benefited from the centre’s services during 2011.

His Excellency Mohammed Helal Al Muhairi, Director General of ADCCI said: “We are delighted to work with ACICA. The two centres can play a positive role in promoting trade and investment relationships between our countries and globally.”

In addition to the strong growth of local economic activity, the Gulf region is increasing its trade and investment ties with Australia, China, India, South Korea, and Japan, ACICA said today.

Australian Ambassador to the UAE and Qatar, His Excellency, Pablo Kang, said international companies “often prefer to take their disputes to a neutral third party location and Australia, as an English-speaking country with first-rate legal infrastructure, is naturally a very attractive venue."

ACICA will next month conduct its first roadshow in Dubai hosted by the Middle East’s largest law firm, Al Tamimi & Co., and supported by the Dubai International Financial Centre.