Home/
News/
If we build it, will the clients come?

If we build it, will the clients come? 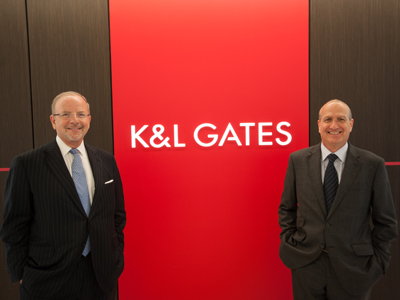 The global head of K&L Gates has flagged more local and international growth for his firm, stating that when lawyers at his firm wake up in the morning, the “first word out of our mouth is build”.

Peter Kalis (pictured left), the chairman and global managing partner of the American-based global law firm, was in Australia last week. Speaking to Lawyers Weekly with the Australian managing partner, Nick Nichola (pictured right), just three months after the merger with Middletons, he said that he planned to grow both the headcount and revenue of the firm in Australia.

“We are a growth orientated law firm, we wake up in the morning and the first word out of our mouth is build,” he said, confirming that K&L Gates will seek to buttress organic growth with lateral appointments. “If you are not a builder you need not apply at this law firm.

“We are culturally of the view that if you stand still in the legal industry you are toast.”

The merger with Middletons has substantially grown the global firm’s Asia-Pacific presence.

In 2012, K&L Gates had seven offices and around 100 lawyers in the region. Following the merger, it now has 11 offices and just over 400 lawyers.

A number of global law firms have entered Australia since the global financial crisis. Stronger Asia-Pacific regional growth when compared to Europe and North America, the resources boom and the pool of common law trained English speaking lawyers in Australia has attracted firms the calibre of Clifford Chance, Herbert Smith and DLA Piper into Australia.

While those factors influenced K&L Gates decision to enter the domestic market, Kalis said the ability to position itself as the law firm of choice for American companies that invest into Australia was the key factor.

Between 2005 and 2011, US investment into Australia exceeded $550 billion, which is greater than Chinese activity into Australia.

“You don’t see it here, but in the US we are running ads targeted at the US in-house corporate counsel community projecting the firm as the solution to their legal requirements in Australia,” he said.

“Well, here is a guarantee, we are not going to lose our shirt.”

In addition to K&L gates, the only other American-headquartered US law firms with a meaningful presence in Australia are Baker & McKenzie, which has been in the domestic market since 1964, Jones Day and Squire Sanders.

“They will figure it out eventually,” said Kalis when asked about the possibility of more American firms entering the Australian market.

No redundancies or fee hikes

The brunt of this was borne by the firm’s “Americas” practice, where revenue dropped by 2.5 per cent and headcount declined by an average of seven per cent. However, its Asia-Pacific network increased revenue by 25 per cent, Europe and Middle East operations reported a 17 per cent revenue increase and income per fully participating equity partner increased.

“The lesson there is that in times of crisis, clients need high-end legal advice more than they ever did,” said Kalis when talking about the firm’s European financials in particular. “The real question is whether your clients are capable of paying the fees.

“That is a matter for law firm management, a matter of intake policy, a matter of vetting clients and making appropriate fee arrangements... and we try hard to do that.”

In Australia, Nick Nichola said that now having a global law firm moniker on invoices had not led to steeper fees.

“For K&L Gates to be locally relevant and locally credible you need to be cognisant of local conditions,” he said, adding that clients are “very sophisticated and know what constitutes value for money”.

“What is a viable fee structure in New York City might not be the same pricing [structure] that is relevant in Brisbane.”

Nichola also reiterated Kalis’ message that the move to a global firm had not seen pressure from global management to downsize or shed lawyer numbers.

A survey of 20 managing partners from global, national and boutique firms in Australia found that almost one third of participating firms expected to roll out redundancies this year.

“That surprised me,” said Nichola. “We certainly always monitor our performance and where we are appropriately structured.

“We certainly don’t see that [redundancies in Australia] but we didn’t make anyone redundant at the height of the GFC either.”

Nichola nominated the firm’s labour, employment and workplace safety practice, as well as intellectual property and dispute resolution as being expected strong performers this year.

If we build it, will the clients come?