Oz delegation spruiks arbitration in US 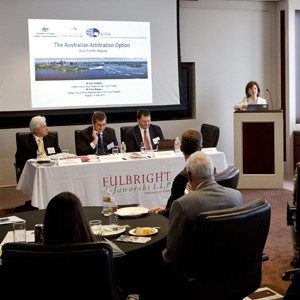 Federal Court Judge Lindsay Foster joined a delegation of lawyers and government officials who visited Houston and San Francisco to promote Australia as a neutral arbitral seat for cross-border disputes.

Alex Baykitch, a partner at King & Wood Mallesons and a fellow of the Australian Centre for International Commercial Arbitration (ACICA), was part of the delegation. He told Lawyers Weekly that the US cities were selected because they are a direct flight from Sydney.

“Distance is a factor for certain clients based in the northern hemisphere,” he said, admitting that this can make it challenging to attract international arbitration work to Australia. He added, however, that direct flights from Houston and San Francisco to Sydney are bridging the distance.

Speaking at both events, Baykitch told US attendees that Australia is “a great place” to host an international arbitration due to its independent judiciary, quality lawyers who specialise in arbitration and a court system that tends to be pro arbitration.

ACICA president Doug Jones told Lawyers Weekly in March that Australia’s judicial system is supportive of international arbitration in the wake of the High Court’s dismissal of a constitutional challenge to the International Arbitration Act.

Oz delegation spruiks arbitration in US