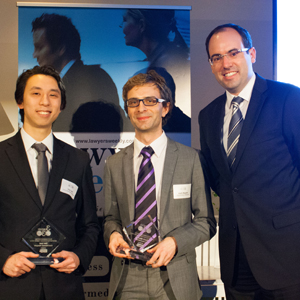 Tim Lee from Corrs Chambers Westgarth and Zach Meyers from King & Wood Mallesons were the Victoria-based winners of this Lawyers Weekly 30 Under 30 Award, alongside NSW-based Gilbert + Tobin lawyer John Rhodes.

In his short TMT career so far, 27-year-old Lee has packed a lot in. At the age of 25 he was heavily involved in the demerger of Foster’s Group Limited to form Treasury Wine Estates and Carlton & United Breweries (CUB). Following this transaction, CUB requested that Corrs provide Lee as a seconded lawyer, a position that he worked in for five months.

“I found that the secondment really helped me to sharpen my commercial thinking and improve the quality of my advice,” Lee said following the Awards. “In particular, secondments give you a much better appreciation of the ‘360 degree’ awareness that in-house counsel need to have [and]  this helps you, as external counsel, to provide more tailored and incisive advice.”

Lee added that he felt very honoured to have won the Award and said: “The 30 Under 30 Awards are a fantastic way to recognise the contributions that young lawyers make to the profession and an encouraging reminder in somewhat uncertain times that the future of the profession is in bright and capable hands.”

Meyers has acted on some high-profile matters in his short career, including working as the primary external lawyer assisting Telstra to obtain ACCC clearance for its acquisition of Adam Internet, which was Telstra’s first attempt to seek ACCC clearance of an acquisition in the fixed-line telecommunications market.

In his submission he said that a way the profession could be improved is if lawyers make more of an effort to truly understand their client’s business: “There can be a tendency for lawyers to avoid the technical detail in TMT matters; but clients get more value if TMT lawyers really understand clients’ businesses and how they work.”

Meyers also does work with the Asylum Seekers Resource Centre.

High-achieving Rhodes persuaded a colleague to join him in G+T’s 2013 stair climb, where they raced up 37 floors of the Citi building in Sydney’s CBD for two hours to raise money for charity.

Professionally, Rhodes recently completed almost 18 months of work advising one of the Big Four banks in relation to its renegotiation of a number of its core banking and IT systems, and is also advising the NSW Government on the new Opal public transport smartcard ticketing system.

Jamie Griffin from Norton Rose Fulbright was the other finalist in this category.