Wild one takes out Partner Award 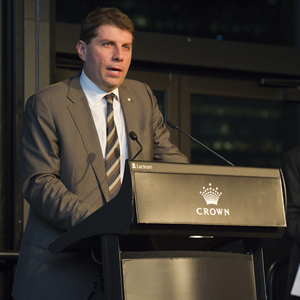 The winner of the Partner Award, proudly sponsored by Burrows Legal, believes there is more to being a partner than just practice.

“Being a partner at a law firm has changed a lot over the years, and I think there are a lot more demands on a partner these days,” said Wilder. “Ultimately, the responsibility of a partner is to make sure those beneath you in a team that you look after are brought through and you mentor people and you look after them.

Wilder has become one of the most decorated and influential private practice lawyers in Australia as a result of his expertise in the emerging areas of climate change and emissions trading.

He is a board member of the Clean Energy Finance Corporation, director of Low Carbon Australia, chairman of the NSW Climate Change Council, on the governing board of the Renewable Energy and Energy Efficiency Partnership (REEEP), a governor of WWF, and chair of the R.M. Williams Agricultural Holdings Henbury Project Steering Committee.

Wilder is also a professor of Climate Change Law at the Australian National University.

In 2012, he was awarded a Member of the Order of Australia in recognition of his services to environmental law.

“I think in many ways the area that we’re in is really about future change and it’s about the law and policy around climate change,” said Wilder when talking to Lawyers Weekly about the biggest challenges facing his practice area over the next 12 months.  “Things from clean energy to energy efficiency, renewable energy, green growth, but a lot of that really will take time to develop and I think that’s partly because of politics.”

When not travelling the world advising countries such as the Republic of Gabon on the development of a Sustainable Development Law, Wilder enjoys ocean swimming and has an eye for architecture.

He has told Lawyers Weekly that if he was not a lawyer he would have become an architect “to create beautiful buildings”.

However, the law and his family remain his core passions.

In accepting the Award he thanked his wife for “being his best partner” and made a call to arms to young lawyers in accepting what is the outstanding award for a senior lawyer.

“For many of the young lawyers in the room, as you go forward in your careers, it is very important that if you believe in something, and if you have a cause or a purpose, or believe in justice, that you use your position in the law to prosecute the case that you believe in.”

Wild one takes out Partner Award