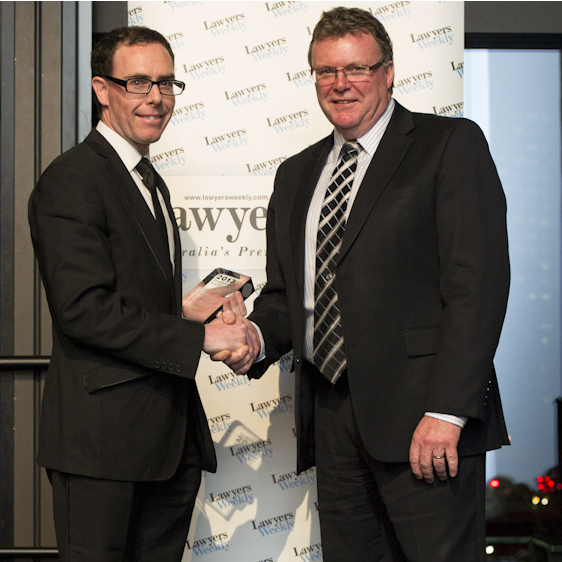 The managing partner of Salvos Legal said it was surreal to win the Managing Partner Award at the 2013 Lawyers Weekly Australian Law Awards ahead of a field of finalists he looks up to.

The managing partner of Salvos Legal said it was surreal to win the Managing Partner Award at the 2013 Lawyers Weekly Australian Law Awards ahead of a field of finalists he looks up to.

“I am so grateful to the other contestants for this Award,” said Luke Geary (pictured left), who won the Pro Bono Award at last year’s Law Awards.

“I feel as though you are not quite my peers as I look up to you as leaders in the legal profession and, with me being such a young starter, I have a lot to learn from you.”

Category judge, legal consultant John Chisholm (pictured right), said Salvos Legal and Salvos Legal Humanitarian was a truly remarkable story and one of which the whole of Australia should be proud.

Set up in late 2010 with seed funding from the Salvation Army, the firm became entirely self funding by 2012.

“None of this could have happened without the vision, leadership and sheer hard work provided by Luke Geary,” said Chisholm.

“Totally innovative and unlike anything else seen in Australia, Luke Geary has fulfilled his dream to provide holistic justice to the less fortunate funded by a commercial legal practice.”

Salvos Legal charges market rates for its speciality legal services and funnels the profits straight back into its humanitarian arm – a free legal program for society’s most needy - which serves in more than 260 cases every fortnight.

Geary said a big part of winning the Award, for him, was validation of what is a unique and innovative business model that is essentially unchartered territory.

“I’ve certainly had many sleepless nights wondering if it would succeed and, certainly, looking back, I know that that was unnecessary,” he said.

Humble in accepting the Award, Geary said he was lucky to have a cause “worthy to unite” his team and that he just happened to be the one that joined it a little earlier than some of the others.

“You’ve got to believe in your people right? It’s about not being the only one out in front; you have to have everyone very close behind,” he said.

While the managing partner gig has its challenges, like having to worry about end-of-month billing and how to offer staff better opportunities, Geary said he has seen incredible outcomes through the work of Salvos Legal’s staff and volunteers.

Sophie Roberts, an associate at Salvos Legal, took out the 2013 Young Gun Award on the night, in recognition of her work for newly-settled refugees across Western Sydney.