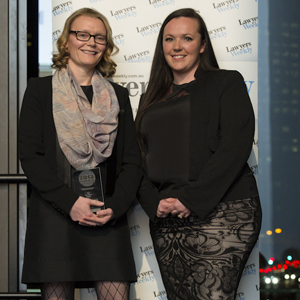 An expert in the area of indigenous rights and reconciliation action plans (RAPs) was the winner of the Pro Bono Award, proudly sponsored by Burgess Paluch Legal Recruitment, at this year’s Lawyers Weekly Australian Law Awards.

An expert in the area of indigenous rights and reconciliation action plans (RAPs) was the winner of the Pro Bono Award, proudly sponsored by Burgess Paluch Legal Recruitment, at this year’s Lawyers Weekly Australian Law Awards.

“It means a lot personally to be recognised among that strong field of pro bono professionals, but also recognition for pro bono in and of itself is really significant because it’s a core element of legal practice these days,” a delighted Massender told Lawyers Weekly after accepting her Award.

“To have a [Pro Bono] category at these Awards really reflects the significance that pro bono has in the balanced diet of a legal professional.”

Masseder was instrumental in the development of HSF’s first RAP and she also successfully advocated for the firm to amend its pro bono guidelines to allow solicitors to do pro bono work for indigenous businesses. She has also held discussions with other law firms and business organisations on the development of their RAPs.

Massender is also renowned for her expertise with claims before the NSW Aboriginal Trust Fund Repayment Scheme and has advised other organisations in this area. She took a leadership role from as early as 2004 in writing submissions on behalf of clients leading to the establishment of the scheme. Over the duration of the scheme, she assisted 45 clients with a total of 75 claims; at the conclusion of the scheme in 2012 a total of $451,640 had been recovered on behalf of her clients.

“It’s always a challenge to reach everyone in the community that may have a legal need so the best pro bono programs are those that really, from a strategic perspective, focus on met legal need, and don’t try and do everything for everyone but really target one area and do it really well,” added Massender.

“In a firm, not everyone necessarily ... has had an opportunity to participate, so it’s about smoothing out those opportunities and making sure that anyone who’s interested can access meaningful work.

“Particularly in some of the transactional areas, where the topic of the skill-set itself doesn’t naturally lend itself to pro bono, it’s incumbent on us to make sure that we’ve got other opportunities for those lawyers if they want to be involved.”

The other finalists in this category were: Andrew Burnett from Squire Sanders; Daniel Creasey from DLA Piper and Ian Hill QC from William Crockett Chambers, who made a joint submission, and Tamara Sims from Gilbert + Tobin.