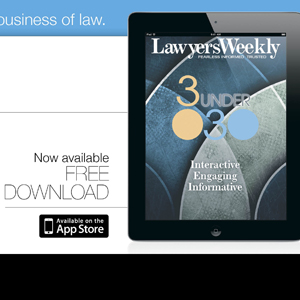 iMonitor is run by the US consulting and research firm McPheters & Company and provides evaluation and global tracking of more than 8000 periodical and news-related apps from more than 70 countries.

The ratings are based on specific criteria, including design, functionality and media content. The app is marked out of a possible total score of 15 – the Lawyers Weekly app received a score of 12.5/15.

Writing about the fortnightly Lawyers Weekly app in its report, iMonitor said: “It’s not often that the best of the recent introductions is a B2B publication.

“[Lawyers Weekly’s app] was one of the few notable introductions which is optimised for both portrait and landscape.”

iMonitor lauded the app’s layout, the ability to connect with Lawyers Weekly’s social media channels through the app and the app’s animated, video and bonus content.

“Helpful tabs at the top indicate the section of the magazine, and we liked the options that users are provided to ‘join the conversation’ through the publication’s LinkedIn group or via Twitter and Facebook,” said the report.

“The app makes extensive and especially good use of animation, and a wide range of videos are clustered into their own section at the back [and] their use of charts as bonus content is interesting.”

The app ranked ahead of other ‘new & noteworthy’ paid-for apps from Vanity Fair France and Australian Geographic Magazine.

The ranking of the app was praised by Lawyers Weekly publisher Zeina Khodr: “We are thrilled that our digital magazine app for Lawyers Weekly has been named the highest-rated app in the August list of ‘new & noteworthy’ apps by iMonitor.

“Our team has developed a hybrid content model that has allowed us to create an immersive and engaging digital experience for our users that complements our print magazine, daily e-newsletters and website,” she added.

The free fortnightly app was originally launched on 5 July and the latest edition can be downloaded here.