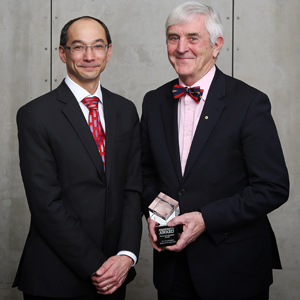 A former LIV president who chaired the Victorian Bushfires Royal Commission has been presented with that state’s top legal award.

Bernie Teague was presented with the President's Honorary Award at the Law Institute of Victoria’s 2013 Legal Awards on Friday (30 August).

Teague was a senior partner with Corrs Chambers Westgarth before taking a role as a judge with the Supreme Court of Victoria in 1987, becoming the first solicitor to be appointed directly to the bench.

He has been president of the LIV on two separate occasions and, after stepping down from the bench in 2008, was appointed to head the Royal Commission into the Black Saturday bushfires in 2009.

LIV president Reynah Tang (pictured on the left with Teague), a current partner at Corrs, said he decided to bestow this award to Teague in recognition of his “enduring, powerful, innovative and industrious work”.

Teague was one of 12 award winners.

In 2012, Pearce established the non‐government organisation Human Rights Youth Ambassadors Ghana when she was placed at the Human Advocacy Centre.

The Paul Baker Award recognises outstanding achievement in administrative or human rights law.
Pearce is the first student to win this Award.

Other award winners included Louise Johnson from the Department of Health, who won the Government Lawyer Award, while the workplace relations boutique Justitia won the Law Firm Award.

He has been instrumental in seeing his firm increase its pro bono participation from 25 per cent of lawyers to 89 per cent.

In March, Lawyers Weekly reported on a case where Harcourt led the Russell Kennedy team that successfully acted on a pro bono basis for a Hazara refugee in a Federal Court action that found the former immigration minister, Chris Bowen, did not act in accordance with the law.

The court victory meant the refugee would have his application for asylum reconsidered after it was first rejected.