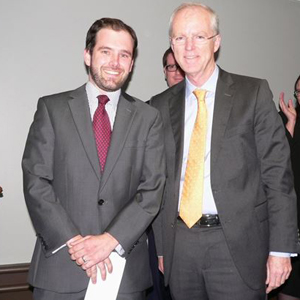 A young Ashurst lawyer has taken the crown at the National Golden Gavel competition for the second year running.

This year, Brisbane-based senior associate Marc McKechnie (pictured, on left, with Justice McMurdo) slayed his opponents with his futuristically witty insight into the topic: Meet Judge Jetson and his Associate Elroy: Space courts of the future.

McKechnie said it was great to take out the award for the second year running, albeit with a small amount of additional pressure as defending champion.

“The real extra pressure came from the fact that because it was in Brisbane this time it meant that the judge (Justice Philip McMurdo) was someone that I would have to appear before professionally again in the future,” said McKechnie. “It’s a lot easier to do these things outside your home jurisdiction.”

McKechnie got very cheeky with one of the judges at last year’s Adelaide-based competition, comparing the looks of barrister Anthony Durkin to the evil duke in the film Moulin Rouge, who was played by actor Richard Roxburgh.

“That little dig got some good laughs and, fortunately, he [Durkin] has a sense of humour,” said McKechnie at the time.

McKechnie beat the champions of each state and territory Golden Gavel competition to take out the prize; each competitor has to speak for five minutes and is given their topic just 24 hours before the competition.

McKechnie delivered his speech as a judgment of a space court in the year 2065 with a situation involving rocket crashes, aliens, comets and space stations that got progressively more complicated and ridiculous as it developed.

“All the speakers were of a really high standard and very entertaining – it was great to be part of such a fun evening and be judged as the winner,” said McKechnie.

“The thing I enjoy most about Golden Gavel is coming up with ideas that make everyday legal concepts funny.

“Most of the audience are generally lawyers and it is very satisfying when you take a concept that they recognise from their work or studies and then twist it in a way to make them laugh.”

Second place was taken out by Allens’ William Thomas from Victoria for his speech Twerk, crowd surf and go berserk: Music festivals – a liability lawyer’s dream, while the People’s Choice award went to Matthew Littlejohn from the Northern Territory for his speech Send the ravens to file the pleadings: Lessons for lawyers from Game of Thrones.

NSW was represented by ABC lawyer Grant McAvaney, who took out the state title in May this year.