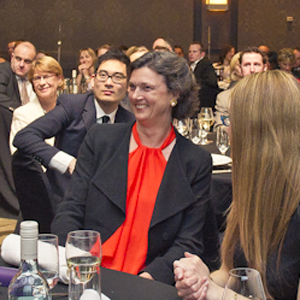 Sharon Cook won the Lasting Legacy Award because she uses her position to make the legal profession a better place.

Cook, the managing partner of Henry Davis York, was awarded the blue-ribbon Lasting Legacy Award at the Lawyers Weekly Women in Law Awards in Melbourne on Friday night (18 October).

“I hope that in a few years time, no matter how much fun we have had tonight and how inspiring the night has been, that we don’t need a night like tonight,” said Cook when accepting the Award. “We absolutely need tonight now... but I hope there will come a time when female success becomes the norm; it will not be something that will be singled out.”

Cook has acted as a trailblazer for women in what has been a glittering legal career.

Cook was elected as HDY’s managing partner in 2008. During her time as managing partner HDY reached the $100 million revenue mark in 2010-11, opened an office in Brisbane two years ago and has seen the proportion of female partners increase to account for nearly one third of the firm’s current partnership.

“I want to thank the male partners at HDY, the ones that made me their managing partner five-and-a-half years ago without noticing that I was actually a woman,” she said. “They just went for the best person for the job and that was me and I have proven it over the next five years,” she continued, to a round of applause from the around 200 people gathered at Melbourne’s Sofitel Hotel.

In accepting her Award, Cook mentioned the work of Elizabeth Broderick, the Sex Discrimination Commissioner, who convened the Male Champions of Change initiative.

“It is not just about women, it is about men and women,” said Cook.

Compassion marks her greatness
Fiona McLeod SC (pictured below with Cook on her right) one of the nine Lawyers Weekly Women in Law Awards judges, introduced Cook to the podium.

McLeod compared Cook to Australia’s first female silk, Dame Roma Mitchell, citing both women as figures in the profession that have fought for change and conducted themselves with integrity and sincerity.

In addition to being the first female appointed as a Queen’s Counsel, Mitchell was also Australia’s first female judge, university chancellor and state governor.

“Those of us lucky enough to know Dame Roma, or to hear about her, will know that her most incredible feature was her warmth towards human beings,” said McLeod.

“She opened her arms and said without reservation, as a lawyer, judge, chancellor and governor, ‘well done dear, well done you’.”

“The winner of tonight’s Lasting Legacy Award has done that throughout her career. In her own words and her own way she has said ‘well done dear, walk with me’.

McLeod, who currently has oversight of the Law Council of Australia’s National Attrition and Re-engagement Study, has asked Cook to look at draft recommendations from that study.

Cook has regularly used her position of prominence in the profession to agitate for change.

In 2012 she told Lawyers Weekly that “it is a sad indictment of the profession” that she was then the only female managing partner of a large Australian law firm.

Last month she told a conference that women have succeeded in the law “in spite of the culture, not because of it”.

In accepting the Lasting Legacy Award, she called on all women to continue to apply a blowtorch to the profession over its lack of diversity in senior positions.

“We are all role models, no matter what rung on the career ladder we happen to be on,” she said. “We can all affect the outcomes for the benefit of women and for the advancement of women generally, and that is what I have tried to do for my entire professional career.

“You need to step up and do something for our fellow women.”