Home/
News/
A change would do you good

A change would do you good 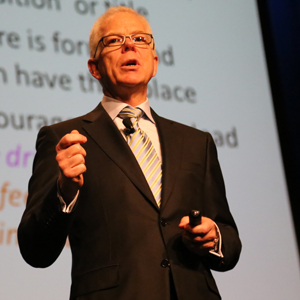 “[Clients] want more for less delivered in a different way,” said Milliner (pictured), a senior advisor at UBS and the current B20 Sherpa for Australia , when giving his talk entitled Where are you leading your firm?, at the Summit in Sydney’s Entertainment and Convention Centre last Friday (18 October).

Milliner said that the GFC caused a seismic shift in the legal market in Australia and worldwide.

Milliner added that technology and the entrance of global firms to the Australian market have also had major impacts on law firms.

“We’ve got to think globally and across markets and the competitive rivalry [in Australia] is intense,” said Milliner. “What that means is that this market is no longer as attractive [to global firms] as it was.”

Milliner also criticised what he described as the “mini-me” approach that has existed among Australian firms up to now; where a firm simply identified its most successful competitor and copied what it was doing.

“That will no longer work in this market,” he said. “If all that you are doing is copying a rival you can’t be very successful.”

“The only way to get more-than-average profits in a competitive market is to be different and more competitive than the others,” he added.

“If you stop innovating you will be eaten up by everybody else that innovates around you.”

Milliner also said that he doesn’t believe any firms will go out of business in the next year or two “unless they’ve done something radically stupid”, but that he thinks profits will continue to fall.

“Firms need to do some purely strategic thinking ... far beyond budgets [and ask] why is your firm there?”

Milliner added that firms need to look at what is unique about their firm and about legal practice generally – what are the parts that cannot be replaced by competitors from outside the legal industry.

“If you look at where we are now, the most successful area for a lot of firms is litigation,” said Milliner. “Not the traditional discovery part ... but the advocacy part.

“It’s not easily substituted, you can’t have other people providing that service, and barriers to entry around advocacy skills are quite high,” he added.

Leading from the back

Milliner also said that firms need to look at their leadership structure and take a whole-of-firm rather than a hierarchical approach to leadership.

“It’s informal leadership that has the power to drive the biggest organisational changes [and] good leaders look to encourage others to lead.”

He added that firms that fail to allow leadership “from below” are wasting talent.

“Firms have got bundles of incredibly well-educated, highly-intelligent, capable people who are underutilised in [a leadership] sense because what they are told to do is write legal advice.”

A change would do you good