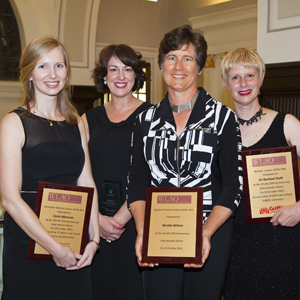 A principal from Maurice Blackburn and a Cairns barrister were among the group of outstanding female practitioners recognised at a major Awards function this month.

Four awards were handed out on the night, with Michelle James from Maurice Blackburn winning the Queensland Law Society’s Agnes McWhinney Award.

“Despite recent convenient political commentary to the contrary, ours is an important profession and one with the genuine best interests of the community at its heart,” said James (pictured second from left with the other Award winners) when accepting her Award. “This is true, I like to think, of all practitioners, no matter which side of the political spectrum you may sit on.”

Agnes McWhinney was the first female lawyer in Queensland and this Award acknowledges outstanding professional or community contribution by a woman lawyer who has practised as a solicitor.

The prestigious Queensland Woman Lawyer of the Year Award was taken out by Dr Rachael Field, an associate professor at the Queensland University of Technology.

Since 2004 she has been the president of the Women’s Legal Service Brisbane Management Committee.

Around 200 guests attended the Awards dinner at Brisbane City Hall.

Justice Jenny Hogan SC, who was appointed to the Family Court of Australia earlier this year, delivered the keynote address.

While the evening celebrated the success of the award winners and work of the WLAQ, the organisation’s president, Natalia Wuth, told the audience, which included a number of judges, silks and law firm partners, that equality in the profession is still a long way off.

“Advancing the interests of women in the law is not just about our rights as individuals to flourish in our chosen career; it’s much more than that,” she said.

“Removing the systemic and cultural barriers to the success of women in the law is going to deliver a stronger, better legal profession.

“As the newly-elected president of the Women Lawyers Association of Queensland, I will be working with my colleagues, and building on the hard work of so many here tonight.”

Click an image below to view a photo gallery from the night; more photos can be seen on the WLAQ Facebook page.