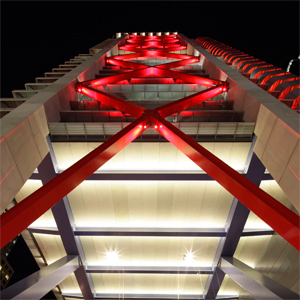 Sydney Lord Mayor Clover Moore was among the dignitaries who officially opened the skyscraper at 8 Chifley Square, the new home of Corrs Chambers Westgarth’s Sydney offices.

Following an indigenous ceremony to cleanse the building, Moore spoke on the environmental and design features of the building, describing it as a “striking new addition to our city’s landscape”.

“This building is ... very elegant. It’s also incredibly bold and gutsy,” she said.

“I particularly applaud the outstanding credentials in sustainability ...  [it is] one of the greenest buildings in Sydney.”

Corrs staff moved into its 8000 square metres of open-plan office space on 21 October. The firm will occupy 10 levels of the 34-storey building, which represents almost half of the building’s leasable area.

Corrs’ CEO John Denton said the move is a deliberate step away from the outdated concept of a ‘closed door’ office and hierarchical mentality, with the desks of Corrs partners interspersed among those of executive assistants and junior lawyers.

“Our partnership recognises the best work happens on the ground and that good ideas come from every level. From new graduates to partners, this is about bringing our people together for a more connected and productive workplace,” said Denton.

He added that the new offices reflect the firm’s commitment to fostering more innovative and collaborative ways of working, in line with major shifts in mobile technology, work practices and worker demographics.

See below for a photo gallery, including a preview of the offices and highlights from the launch event.