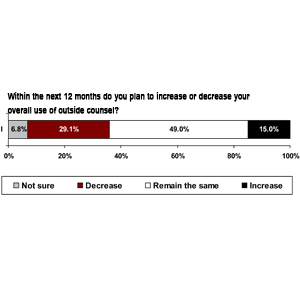 An international legal consultant has warned Australian firms they need to overhaul their fee structure as a major US survey shows GCs are prepared to increase their legal teams and outsource less work.

The legal consultancy firm Altman Weil released its Chief Legal Officer Survey last week. More than 200 chief legal counsel participated in the survey in September and October. The overwhelming majority of survey respondents (89.3%) said they planned to increase or hold steady the size of their in-house legal team, with 78.1 per cent of respondents indicating they would be reducing or not adding to the amount of work they outsource to private practice firms.

“Along with shifting work from law firms to in-house lawyers, corporate law departments are also shifting law firm work to lower-priced firms, reducing the overall amount of work given to outside counsel, shifting in-house work from lawyers to para-professionals, using contract lawyers, using technology tools to increase efficiency, and outsourcing to non-law-firm vendors,” said the survey in detailing how in-house departments are seeking to control costs.

The survey also found that 78.5 per cent of respondents had negotiated price reductions from outside counsel to control costs, and just over 40 per cent of legal heads had shifted work to lower-priced firms.

When asked the size of such price reductions from law firms, the highest response received (48.1%) was between six and 10 percent.

Yet despite the majority of GCs indicating they were able to get a reduction, the overwhelming majority of in-house respondents thought it was through gritted teeth.

When asked the question: “How serious are law firms about changing their legal service delivery model to provide greater value to clients (as opposed to simply cutting costs)?”, respondents were given the option of picking a number between zero (not at all serious) and 10 (doing everything they can), 85 per cent of respondents responded with a number value between zero and five.

Thoughtful and early strategies to resolve legal issues cheaply and a willingness and ability to provide recommendations rather than analysis were cited as actions law firms could take to help avoid unnecessary actions and associated costs.

“The billable hour is a symptom, it is the fever, you need to get rid of the cancer, which is the timesheet,” he said.  “That is what keeps lawyers mired in the mentality that they sell time.”

Baker spoke to Lawyers Weekly late last month, prior to the release of the Altman Weil survey. He was in Australia in October accompanying the domestic legal consultant John Chisholm on a national tour entitled Firm of the Future Past.

Chisholm, a former managing partner at Maddocks and Middletons prior to its merger with K&L Gates, has been an outspoken advocate in Australia for the eradication of hourly billing and timesheets.

Baker said that many general counsels he had spoken to in Australia said they would “gladly pay more” for legal work on a fixed-fee basis, as opposed to time-billing, as the upfront nature of fixed-fee arrangements provided certainty.

He also said that when it came to comparing Australian and US law firms on innovation, US firms were more prepared to offer alternate fee arrangements than their Australian counterparts.

“The US is in the lead with the pricing revolution,” he said, adding this is evident in other professional services areas such as accountancy.

“Australia, New Zealand and Canada are right behind,” he added, labelling the UK as “laggards”.

Baker also made the point that turning off the timesheet makes commercial sense.

“Look at the firms that have done it; if you talk to any one of them their bottom-line  profitability goes up. “The point of pricing is profit, it’s not about revenue or market share,” he added, using the example of Apple, which has a relatively modest market share on products such as iPhones but a disproportionally large share of industry profits.

“If a firm can’t abolish the billable hour and value price and make more profit, then their pricer needs to be fired.”