Home/
News/
In-house lawyer flies off with another award

In-house lawyer flies off with another award 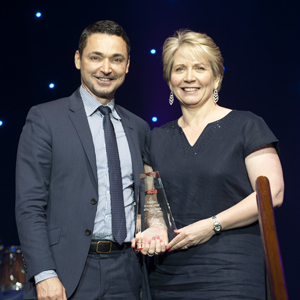 Leading government lawyer Sue Bird has won a coveted In-house Award to go with a gong from Lawyers Weekly in 2012.

Leading government lawyer Sue Bird has won a coveted In-house Award to go with a gong from Lawyers Weekly in 2012.

Bird (pictured with Sparke Helmore partner Rohan White when receiving the Award), who is the chief counsel at the Department of Human Services in Canberra, received the nod from the judges ahead of Chris Gray from the Crown Solicitor’s Office and Joanne Keen from Energex.

Bird is the head of a 200-strong legal team across 29 offices throughout Australia.

The coveted Corporate Lawyer of the Year Award was picked up by Peter Hastings, the general counsel and company secretary at Elders Limited.

Hastings has played a pivotal role in steering the company through ASIC investigations and a number of transactions that Elders has undertaken to reduce its debt.

“Very few in-house lawyers in Australia have had to deal with the breadth of operations, or the demise in fortunes, that Peter has at Elders,” said ACLA in a statement.

The other finalists for this Award were Betty Ivanoff from Graincorp and Sarah Turner from Symbian.

Ivanoff was also a finalist for the ACLA In-House Award at this year’s Lawyers Weekly Women in Law Awards.

The two remaining awards were won by Richard Clarke from the Bendigo and Adelaide Bank, and Telstra Legal, which picked up the Excellence in Corporate Social Responsibility Award.

In 2013 Telstra has started to accept pro bono referrals directly from PILCH and this year the telco also launched a Community Contribution Project that creates the opportunity for the team to volunteer and participate in fundraising activities.

Clarke won the Young Lawyer Achiever of the Year Award.

In-house lawyer flies off with another award