Home/
News/
Hours aren’t changing but the office is

Hours aren’t changing but the office is 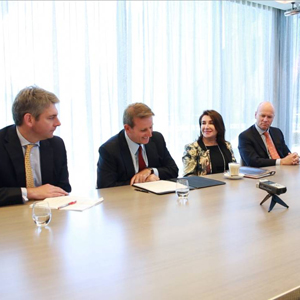 A quartet of prominent partners have told a Lawyers Weekly / Burrows Legal discussion that while staff are under enormous pressure, firms are trying to stop lawyers working in isolation.

A quartet of prominent partners have told a Lawyers Weekly / Burrows Legal discussion that while staff are under enormous pressure, firms are trying to stop lawyers working in isolation.

“We are in the business of people, that’s it, full stop, and for a long time, we all worked in premises that had no regard to that,” said Herbert Smith Freehills partner Peter Dunne, whose firm moved into new Sydney premises at the ‘ANZ Tower’ on Castlereagh Street in August. “The premises now seek to address that.”

HSF was in its former Sydney office at the MLC Centre for 33 years. Dunne said that while financial imperatives still dictate how a law firm measures its success, the move to the ANZ Tower had put the welfare of staff at the heart of the firm’s ethos.

“Do we still have billing targets and are we still in a very competitive environment? Do we all want to fight a good fight and get our fair share of work and hopefully a bit more? Absolutely,” said Dunne.

“But, at the end of the day, it’s the people that you work with, and trying to get most out of them, that I think is the difference between [doing] ok and being really successful.”

Dunne was part of a panel discussion last week at the Sydney office of Corrs Chambers Westgarth that looked at the question of Does office design contribute to productivity and staff happiness?

All the panel members conceded that despite an attempt from senior management at their respective firms to make the office environment more friendly, lawyers were still subject to unforgiving working hours.

When asked by Lawyers Weekly if office design mattered if lawyers still routinely worked 12 to 14 hour days, Levis was quick to point out that it does.

“Absolutely it matters,” she said. “There is research that shows it is really good for health, physically as well as mentally, in having lots of light in your working environment.

“I think that is the point. That going into an environmentally sustainable, light, pleasant and collegiate building is good business.”

In June 2011, Clutz moved into its current Sydney premises at 1Bligh Street, one of Sydney’s most innovatively-designed and environmentally-friendly buildings.

Levis was the partner in charge of the firm’s Sydney office at the time and was instrumental in the design of her firm’s new Sydney home, which eschewed an open plan model that is favoured by many professional services organisations.

Bumping into each other
Corrs moved into 8000 square metres of open-plan office space at 8 Chifley Square in Sydney on 21 October.
Regan said the change in attitude that a change of scene had brought was palpable.

“The organisation has been really energised by the whole move, by the connection, by the light,” he said. “It has been a wonderful experience.”

Dunne said that at his firm’s old office, he could go “for years” without seeing colleagues who worked on the same floor as him. The design of the new office deliberately sought to make sure lawyers from different practice groups saw more of each other.

“Each of the floors, when you come out of the lifts, is a large communal area,” said Dunne.

“Now you are walking past the same group of people each day. It is those subtle little things that start to make a change.”

Wotton + Kearney are leaving its current Sydney premises in Phillip Street to move down the road from HSF at 85 Castlereagh Street.

The insurance boutique is taking two floors in the ‘Westfield Building’, with Kearney telling the panel that the desire to move was partly driven by the need to nip in the bud a split in the culture that the layout of the firm’s current office was aiding and abetting.

“We almost had two different cultures developing, and that was a real problem for us,” he said. “We were pretty keen to move to an environment where we could work hard on collaboration.”

Kearney said an interconnecting staircase between the firm’s two floors would help promote a “strong one firm culture”.

All the panel members said that the move into new offices also offered the ability to reduce its carbon footprint.

Speaking to Lawyers Weekly after the discussion, Hebert Smith Freehills managing partner, clients and industries, Mark Rigotti said that his firm hoped to reduce its paper storage space by around 70 per cent.

“Some clients, when putting in panel submissions, will ask you to comment about your sustainability and what you do about your carbon footprint,” she said, with Regan adding that when you move into a 6 Star Green Star Rated Building, there is a “community expectation” that environmental concerns will be addressed.

While the offices of HSF, Clutz and Corrs are among the most striking in Sydney, Kearney also made the point that firms also had a lot to lose by portraying an ostentatious lifestyle at a time when many law firms and clients are finding times to be tough.

“Our clients wanted to be pretty careful in terms spend,” he said. “They want us to act efficiently in terms of how we fit out our office.

“Our clients probably aren’t after top floor, 360 degree views, marble floors; they want to walk in and see smart, professional and careful spend.”

Hours aren’t changing but the office is