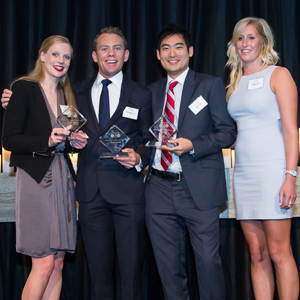 Victorian lawyers notched up a win in the state’s long-running rivalry with NSW, taking two of the three NobleOak Banking & Finance Awards at the Lawyers Weekly 30 Under 30 Awards.

Victorian lawyers notched up a win in the state’s long-running rivalry with NSW, taking two of the three NobleOak Banking & Finance Awards at the Lawyers Weekly 30 Under 30 Awards.

Award winners Daniel Yim from Gilbert + Tobin and Abigail Farrelly from Ashurst work in the Melbourne office of their respective firms. They were joined in the winners’ circle by Sydneysider Charles Driscoll from National Australia Bank (NAB) at Friday’s (16 May) Lawyers Weekly 30 Under 30 Awards held at Ivy in Sydney.

Speaking to Lawyers Weekly moments after accepting his award, Daniel said he was not only pleased to add the accolade to his CV, but felt that it was “great recognition for the firm in Melbourne”.

Daniel started at G+T in 2011, when the Melbourne office was barely a year old. Since then he has been “getting the name out there” by promoting the new office at industry events.

“My first 18 months at the firm were particularly demanding – as a newcomer to the Melbourne market we were challenging firms who had been established here for many years,” he said.

Daniel has proven he is the stuff partners are made of, sourcing new work for the Melbourne office and leading its graduate recruitment and mentoring programs. However, he said he’s taking his career one step at a time, for now.

“I’m very busy and happy where I am, although you’ve got to be opportunistic,” he added.

Just around the corner on Collins St is Ashurst’s central Melbourne office, where fellow award winner Abigail Farrelly has also demonstrated that she is a future leader of the legal profession. Promoted to senior associate within three years of being admitted, Abigail has, like Daniel, played an integral role in her office’s recruitment and career development strategy.

Abigail attracted high praise from the Award’s judges, who said: “A remarkable young lawyer ... Abigail’s technical skills and experience, as well as her commerciality, are already well beyond what would be expected of the best of her peer group.”

Another highlight of Abigail’s submission were her reflections on the issues affecting the profession, including diversity; training, mentoring and leadership, and legal documentation.

The category’s third winner, NAB’s Charles Driscoll, also impressed the judges with insights into how the law must change in the future. Charles raised long working hours as “no doubt the greatest challenge for lawyers in large firms”. He also highlighted partner remuneration, billing models and client demands as areas requiring improvement.

Charles’ comments resonate with the recently-released Tristan Jepson Memorial Foundation (TJMF) depression guidelines, which cited balance and the need to promote work-life harmony as critical factors in tackling the high rate of depression in the law.

The youngest lawyer among the winners, Charles’ blend of in-house and private practice experience has made him “a highly-gifted technician”, the judges said.

The other finalists in this category were: Abigail Haseltine from Gilbert + Tobin, James McNaught from Corrs Chambers Westgarth and Nick Sinclair from Norton Rose Fulbright.