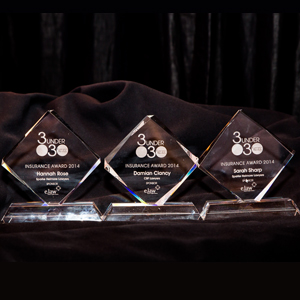 One of the winners of the e.law Insurance Award at the Lawyers Weekly 30 Under 30 Awards said a home-cooked meal from his grandmother was the perfect way to celebrate.

One of the winners of the e.law Insurance Award at the Lawyers Weekly 30 Under 30 Awards said a home-cooked meal from his grandmother was the perfect way to celebrate.

Damian Clancy from CBP Lawyers was one of three winners in what was the evening’s last Award on Friday night (16 May). Damian said that on being announced as a winner, his first thought was of his grandmother, who has not been well recently.

“I am half Sri Lankan on my mother’s side, so when you achieve something, it usually means you will be fed a lot,” said Damian, who flew in from Melbourne to attend the Awards. “I saw her on Sunday and got fed a lot and didn’t need to eat anything on Monday.”

Damian is a senior associate with CBP, with the judges being impressed by both his legal work and advocacy for alternate billing arrangements.

“A number of insurance companies these days are trying to keep a lot of work in-house and they want incredible value for money,” he said. “That is a great challenge and I enjoy it, and while a lot of people say ‘oh no’, my nature is to say ‘game on’.

“If we can get the same result for lower costs, lets do it.”

27 year-old Sarah Sharp from Sparke Helmore was the youngest of the three winners. Sarah said that a secondment with W.R. Berkley Insurance early in her career had helped to hone her skills once back in private practice.

“The secondment was a big moment in my career and I made a lot of connections and saw how insurance works from [the] client side,” said Sarah.

Barbara Stenning, the national head of claims at W.R. Berkley, said that Sarah represents the “integrity and ethics we would all like to see in the generation that will become tomorrow’s leaders”.

The second winner from Sparke Helmore in this category was Hannah Rose. Sarah Sharp paid tribute to her colleague in the national firm’s Sydney office, describing her as an “extreme achiever”.

Hannah, a senior associate, has the confidence of the firm’s partnership to be handed areas of key responsibility early in her career. She has had the conduct of several professional indemnity and product liability claims, and is also the firm’s National Corporate Social Responsibility Manager.

“Hannah represents the Association with poise and is often the most successful on the committee in terms of sourcing and securing sponsors,” said Emma Hoolahan, the president of the Association for Women in Insurance.

The three additional well-credentialed finalists in this category were Michael Rumore from CBP Lawyers, Joanna Laidler from Minter Ellison and James Sharpe from Norton Rose Fulbright.