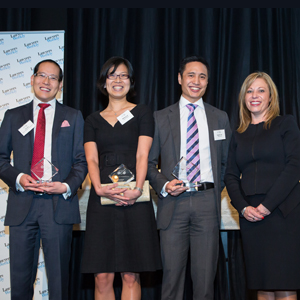 The winners of the Government Award at the Lawyers Weekly 30 Under 30 Awards can handle the client and public scrutiny of their work.

The winners of the Government Award at the Lawyers Weekly 30 Under 30 Awards can handle the client and public scrutiny of their work.

Minter Ellison’s Mellissa Lai was one of the youngest winners on the night. The 26 year-old is with the national firm’s Canberra office, and her unflappable nature shone through when she said that while the “usual sorts of pressure apply” with regard to government work, it is important to keep things in perspective.

“The Canberra office is conscious of work-life balance,” said Mellissa, who has delivered training sessions to in-house counsel and is involved in Minters’ annual ‘Young Lawyers Hypothetical’ event. “You need to put the time in to get the work done, but there is no concept of ‘face time’ here. It is a pretty supportive environment.”

Julia Mansour, a senior adviser with the Petrol Sniffing Strategy Section, described Mellissa as being “very good at identifying and providing clear and considered advice on the consequential issues”.

Jin Ooi from Corrs Chambers Westgarth was praised for his focus on healthcare issues. “His focus on policy areas not in a strict legal framework is to be highly commended,” said the judges.

Jin is a trusted adviser to the Commonwealth Department of Health and the Therapeutic Goods Administration (TGA). He told Lawyers Weekly that he enjoys acting on matters that put the public interest at its core, both within his area of practice and in doing pro bono work.

“Lawyers in the big firms are a very privileged lot, so giving time for pro bono is one way lawyers can give back to the community,” he said.

Clayton Utz’s Eugene Tan is another lawyer who acts on his social conscience. Eugene impressed the judges with his combination of legal expertise working on high-profile matters, such as the Barangaroo project, and his entrepreneurship, as evidenced by founding the SecondCycle charity.

“Eugene has accomplished so much in his short career, combining a successful practice at a top-tier firm with outstanding pro bono and charity service,” said the judges. “He is an inspirational young lawyer.”

The other finalists in the inaugural Government category were the Minter Ellison duo Andrew Bass and Jane Woodward, from the firm’s Canberra office, and Eugene Tan’s colleague from Clayton Utz in Sydney, Kathryn McCormack.