Home/
News/
These lawyers have the power

These lawyers have the power 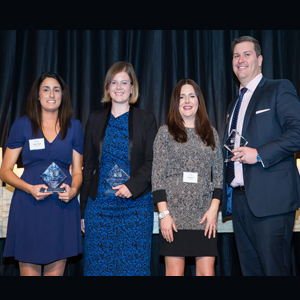 The winners in the JLegal Energy & Resources Award help to ensure things happen.

Jasmin Singh, from Clayton Utz in Brisbane, was promoted to senior associate at 27 in 2012, and her career has gone from strength to strength since then.

Jasmin told Lawyers Weekly that it is the range of work that she enjoys about working in the energy and resources sector.

“I like the diversity of the work itself, in that you can be involved in many different types of transactions and you are never bored,” she said. “The clients you work with and the people in those organisations all work together in a collaborative way as everyone is working towards the same goal … as opposed to something like litigation which has more of an adversarial base.”

Megan Coall from King & Wood Mallesons’ Sydney office is, like Jasmin, a high-achieving female in an industry that has a reputation for being blokey.

Originally hailing from the Hunter Valley north of Sydney, Megan said that more and more female lawyers are attracted to energy and resources work.

“When [you] see our team, there are a lot of girls coming through the student ranks,” she said, adding that on the client side, it is still a male-dominated sector.

“It can be tough up-front [being female], but once you start doing the work and meeting with the clients you become the trusted adviser, and when you get to know them on a personal level, that tends to break down barriers after a while.”

Megan has also been promoted to senior associate while still in her 20s, and she combines her practice with being a King & Wood Mallesons Wellbeing Officer and doing a range of pro bono and charity work.

The second Brisbane winner in this category is Liam Davis. The McCullough Robertson lawyer brings a unique skill-set to the firm’s table, with Liam being praised by the judges for his expertise in native title and cultural heritage matters.

Liam’s expertise in these areas was demonstrated by Peabody, one of the firm’s key clients, taking Liam on secondment for a fair chunk of 2011 and 2012 to be the native title and cultural heritage coordinator for the world’s largest private sector coal company.

“During this time I found Liam displayed maturity, skill and diligence beyond his years,” said Peabody’s Gary Lee. “Liam showed great cultural sensitivity and so was able to consistently deliver the required outcomes within acceptable timeframes.”

The other finalists in this category were the Perth duo of Cassandra Lee from Ashurst and Lisa Butler from Squire Sanders.

These lawyers have the power