Home/
News/
In the public interest

In the public interest 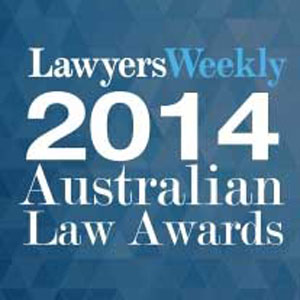 The three finalists in the Public Service Award at this year’s Lawyers Weekly Law Awards, proudly sponsored by Michael Page Legal, are an eclectic and talented bunch.

The three finalists in the Public Service Award at this year’s Lawyers Weekly Law Awards, proudly sponsored by Michael Page Legal, are an eclectic and talented bunch.

The first finalist, Mary Macken, is the corporate counsel of the State Transit Authority in New South Wales.

In 2012 Mary, who is a former NSW Law Society president, was awarded the French medal of Chevalier of the Legion d’Honneur, which recognised her promotion of Australian-French relations within the legal profession.

Mary is also an elite athlete, having won international powerlifting competitions where she routinely deadlifts weights in excess 160 kilograms, more than three times her body weight.

Mary is also a board member of Legal Aid NSW.

Marisa Muchow is a director at the Australian Building Codes Board. She was nominated by Mike Balch, group manager, certification, at the ABCB. Mike described Marisa as “an impressive lawyer who has worked tirelessly to understand the work of the ABCB and, in doing so, has been able to provide practical and ethical legal advice that has greatly contributed and enabled us to achieve our policy objectives”.

Marisa, like Mary Macken, also has an interest in sports. In 2008 she established Motion Athlete Management to assist athletes in understanding their drug-testing, media and commercial dealings. Marissa did this on a pro bono basis.

Warren is on the board of directors at the Garvan Institute and he is also a former managing director and general counsel of Citigroup in Australia.

Lawyers Weekly would like to sincerely thank all of the law firms, barristers’ chambers, in-house departments and individuals that took the time to make a submission.

The selection of the finalists across the 16 competitive categories was an extraordinarily difficult task for the Lawyers Weekly editorial team.

The submissions of all the finalists will be sent to an independent judging panel featuring leading members of the profession.

The Awards will be held at Sydney’s Four Seasons Hotel on Friday 8 August.

In the public interest