Roxon returns to the law 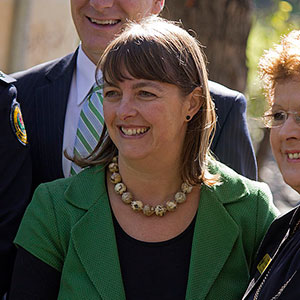 Former federal attorney-general Nicola Roxon speaks exclusively to Lawyers Weekly ahead of her talk on women in leadership that will headline an industry event next month.

Former federal attorney-general Nicola Roxon speaks exclusively to Lawyers Weekly ahead of her talk on women in leadership that will headline an industry event next month.

Roxon is speaking on the topic of ‘Women as Leaders and Leading Lawyers’ at the Australasian Legal Practice Management Association (ALPMA) Summit this August.

Roxon, the country’s first female attorney-general, has worn many hats in her professional life. She has been a politician, lawyer and professor, and has excelled in each of these roles despite the challenges women face in the male-dominated worlds of politics and law.

Having climbed the political ladder, Roxon is now serving the community in a different way – as an adjunct professor at the University of Victoria College of Law and Justice.

Roxon said one of her aims is to shape legal education so that it helps law students see and to seize broader opportunities available to them.

“One of the messages I am going to try to pass on to people is that the tradition of doing your law degree, going into a law firm and staying there for 50 or 60 years is probably a model of the past,” Roxon said.

Women, in particular, have a better chance of moving into more strategic or leadership roles if they take a non-traditional career path, Roxon continued.

“There is a lot of other work that I think legal degrees should be thinking about preparing students for and that those in practice might contemplate doing for a period of time,” she said.

Roxon claimed lawyers, like politicians can benefit from diversifying their expertise and urged practitioners to make a “sidewards step” into different fields such as business, research, public policy and not-for-profit.

She also encouraged people from different walks of life, such as police prosecutors, social workers and accountants, to take up legal studies and use this knowledge to make a difference.

“I don’t believe that the law should just be for the top echelons of [society]. It should be something that’s available to people with a particular passion to use the law for the community.”

Roxon’s own winding career path serves as a case study on the broad range of work open to people with a law degree.

Roxon started her legal career as an associate to Justice Mary Gaudron, the first female Justice of the High Court of Australia. She went on to work as an industrial lawyer, a union organiser and as a senior associate for class action firm Maurice Blackburn.

In the late 90s, Roxon turned to politics. She won the Labor seat of Gellibrand in 1998 and when Kevin Rudd became prime minister in 2007, Roxon replaced Tony Abbott as the minister for health and ageing. Four years later she was appointed attorney-general by then prime minister Julia Gillard.

Roxon said her exposure to the High Court and her work as a union leader to some extent informed her policy perspectives while she was in government.

Roxon described herself as “proudly feminist” but did have a few qualms about the tendency for gender issues to swamp conversations.

One of the notions she wants to impart on younger women is that they have the power to direct conversation to issues and ideas that are important to them. She said this advice will be a focal point of her talk at the ALPMA Summit.

“Part of my message is to encourage women to be focused on the big things, to work out which issues really matter for them… [and] get [their] message through to the people who can make decisions.”

Roxon is one of only 17 women in federal parliament who has had a child while serving as an MP.  She was also the first senior cabinet minister to have a very young child while in office.

While Roxon denied that being a mother was fundamentally at odds with being an MP, she was frank about the realities of the situation.

“Pretending that you can do it on your own is not fair to people because I don’t really believe in the ‘super mum’ idea.

“It was manageable for me because I had an extremely supportive and capable husband and I had a lot of support from my mother, including her travelling with me when Rebecca was very young and I was still breastfeeding.”

The legal profession presents similar challenges for women, according to Roxon, who highlighted the pay structure of big law firms as being disproportionally punishing for mothers “juggling joint responsibilities”.

Lawyers Weekly is the official media partner at the 14th annual ALPMA Summit, which will be held at the Melbourne Crown Convention Centre from 27-29 August.

You can find out more information here.

Roxon returns to the law