Home/
News/
BigLaw won’t die, it will just have a ‘miserable life’

BigLaw won’t die, it will just have a ‘miserable life’ 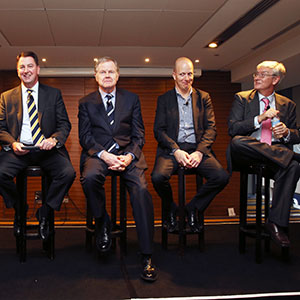 Large Australian law firms are facing very real threats from industry disruptors and are finding it difficult to get a foothold in Asia, according to business consultant Dr George Beaton._x000D_

Large Australian law firms are facing very real threats from industry disruptors and are finding it difficult to get a foothold in Asia, according to business consultant Dr George Beaton.

Beaton is a partner at Beaton Capital and executive chairman of Beaton Research + Consulting.

The panellists agreed that the biggest challenge to traditional BigLaw firms was the rise of disruptors running under alternative business models and using technology to undercut the market.

Beaton framed disruption in the legal industry as part of a much larger phenomenon.

“Wherever you look it begins with consumers [and] slowly but surely it is coming into corporate law firms.”

The panel was divided on the overall impact of the emerging law firms. Some thought they herald the death of BigLaw, while others were more conservative in their judgements.

Beaton said the damage was minimal at the moment in Australia, but NewLaw firms like Bespoke, Advent Balance and Plexus were starting to make an impression on customers.

Recent survey results show that three-quarters of large law firms are recording competition with NewLaw firms and 40 per cent of BigLaw clients are aware and 40 per cent are trailing these firms.

NewLaw firms are growing at 30 to 40 per cent per annum, according to Beaton.

“They are here. You know it, the clients know it. They are growing rapidly, they are private equity backed and some of them (not too many in Australia) are technology-enabled. That is yet to come.”

NewLaw firms are teaching clients new tricks and showing them that they can demand services at a lower or a fixed price, he said.

Partnership or ‘co-opetition’ between BigLaw and NewLaw might be possible, according to the panellists, but overall the future does not look bright for large law firms.

Taking a slice of Asia

Many of the panellists expressed optimism about the huge potential for Australian law firms to expand into Asia as the market grows.

“We are in a fantastic position. We’re in the same time zone as Asia, which is where everything is happening,” John Poulsen said.

However, the panellists agreed Australia is seriously behind in making investments in new technology. Without this, Australia’s potential to make money providing services to the Asia Pacific region will be diminished.

There was also consensus across the panel that the lack of cultural and historical ties with Asia was an issue for Australia.

“There is a tendency for business in Asia to be done by Asians for Asians,” said Beaton.

Asian law firms that have been long-established in particular regions may be best placed to ride the wave as the region experiences economic growth and they are “rising to the challenge”, he said.

A lot of Australian firms have been “bitterly disappointed”. “Firms put on a brave face about it but it’s hard,” he said.

However, the level of competition from home-grown firms depends on the type of customers that international firms are looking to court.

If firms aim to pull local clients, then developing a local partner presence, learning the language and understanding the local culture is hugely important.

If firms are interested in dealing with international or expatriate clients, then this kind of cultural integration is less important.

Beaton said that many Australian firms have questioned the profitability of opening offices abroad.

Firms often have an “overly-optimistic expectation of workflow” and are frustrated by the need to heavily subsidise offices overseas, he said.

BigLaw won’t die, it will just have a ‘miserable life’