Home>
NEWS>
Legal stars shine light on what is possible

Legal stars shine light on what is possible 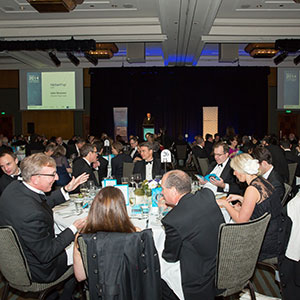 Two pro bono pioneers and one of the most important figures in Australia’s international arbitration movement were among those honoured at this year’s Lawyers Weekly Australian Law Awards, proudly sponsored by Michael Page Legal.

Two pro bono pioneers and one of the most important figures in Australia’s international arbitration movement were among those honoured at this year’s Lawyers Weekly Australian Law Awards, proudly sponsored by Michael Page Legal.

Lawyers Weekly editor Justin Whealing commenced proceedings by reflecting on the profession’s progress this past year. He singled out the Law Council of Australia’s National Attrition and Re-engagement Study and the Tristan Jepson Memorial Foundation’s psychological wellbeing guidelines as two major milestones in addressing the “disturbing” rates of bullying, harassment and depression in the law.

“The most important issue confronting the profession today is to ensure its members can rise each day and go to work without fear of being bullied or harassed, with the confidence that pursuing a career in the law won’t jeopardise their mental health,” he said.

Justin added that a happier and healthier profession hinges on a more collaborative and collegiate culture that does not reward selfish and silo-type behaviour.

Doing it not just for themselves

One firm that can claim that all of its lawyers work towards a common goal is Salvos Legal, which won the prestigious Law Firm of the Year Award, proudly sponsored by CTPartners.

Salvos Legal has a successful commercial arm which funds the salaries of lawyers who carry out the firm’s humanitarian work. In just four years the firm has provided free legal services in 10,634 matters.

“Everyone is unashamedly enthusiastic about making money; nowhere else is that possible without notions of greed and self-interest coming into play,” said Luke Geary, the managing partner of Salvos Legal, in accepting the award.

Geary, who was joined on stage by three firm partners and Salvation Army chaplain Major Susan Reese, could not resist taking the opportunity to boast to doubters of the Salvos Legal model: “sucked in, we were right!”

Another pioneer in the pro bono space was the recipient of The Advocate Award, proudly sponsored by The Tristan Jepson Memorial Foundation.

Nicolas Patrick is DLA Piper’s international head of pro bono and corporate responsibility. He has helped build the firm’s pro bono practice to become the largest in the world; lawyers in the firm’s global network performed more than 210,000 pro bono hours over the past 12 months.

His work has helped thousands of individuals and inspired a strong pro bono culture at DLA Piper.

In his acceptance speech, Nicolas commented that Australia’s traditionally strong pro bono culture was in danger of being diluted by global mergers. He urged the legal profession to not only preserve but export its commitment to pro bono to the rest of the world.

The Advocate Award was one of only two uncontested awards along with the Michael Kirby Lifetime Achievement Award, proudly sponsored by the Nexus Law Group, which was awarded to Professor Doug Jones AO.

Doug is one of the most highly-regarded senior partners at Clayton Utz. The international arbitrator and alternative dispute resolution expert has held a number of prominent local and international positions during his 43-year-long career (and counting), including president of the Australian Centre for International Commercial Arbitration between 2008 and 2014.

A key figure in the establishment of the Australian International Disputes Centre in Sydney, Doug regularly travels the world to promote Australia as a destination to hear international commercial disputes.

But rather than reflect on past achievements, Doug said he preferred to look forward to continuing a career that he “enjoys every day of the week”.

He also acknowledged his wife, legal academic professor Janet Walker, his two children and his personal assistant for more than 20 years, who attended the awards night.

No one firm dominated the winner’s circle at the 2014 Law Awards; however, three global firms were the evening’s only multiple award winners.

Herbert Smith Freehills proved its commercial strength, taking The Dealmaker Award and The Transaction Team Award, while Norton Rose Fulbright was lauded for its leadership, winning two of the senior individual awards.

See Lawyers Weekly this week and next week for profiles of all our law award recipients, including winners in the Barrister and In-house categories.

The winners of the 2014 Lawyers Weekly Law Awards are:

The Law Student Award, proudly sponsored by The College of Law

The Law Firm of the Year Award, proudly sponsored by CTPartners

Legal stars shine light on what is possible