Home/
News/
Holding all the aces

Holding all the aces 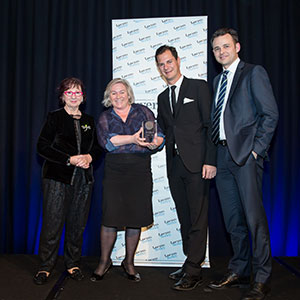 Colleen Platford, a partner in G+T’s litigation and dispute resolution practice, accepted the Award on behalf her team at the Lawyers Weekly Law Awards, proudly sponsored by Michael Page Legal.

She was joined on stage by colleagues Emanuel Confos and Crispian Lynch, who are also partners at the firm.

Colleen was the lead partner representing Google in its High Court win against the ACCC in 2013. The landmark case was the first to address liability for third party content by search engines.

In fact, Colleen has been a key player in many of G+T’s courtroom victories; however, she stressed that dispute resolution is about teamwork and heaped praise on her colleagues for securing G+T’s win over well-regarded dispute resolution teams from Hall & Wilcox, Herbert Smith Freehills, King & Wood Mallesons, Norton Rose Fulbright and William Roberts Lawyers.

“Everyone’s worked really hard in the team this year and have achieved some incredible results,” she said on the Awards night held in Sydney earlier this month (8 August).

“I’m really proud to be a member of the G+T [dispute] resolution team.”

Google is just one of many high-profile clients that have had G+T in their corner through a major dispute. The firm returned to the High Court in 2014 to represent Brookfield Multiplex in its landmark appeal that dealt with whether duties in tort and contractual obligations can run concurrently.

But it wasn’t the dispute resolution team’s High Court wins that most impressed category judge Dr Rosemary Howell, the former secretary general of the Law Council of Australia and a visiting professorial fellow at the University of NSW.

Rosemary commended G+T on its “holistic client service approach” that draws on a wide-range of litigation and alternative dispute resolution (ADR) processes, including mediation, expert determination and arbitration.

In the ADR space, G+T recently acted for Reliance Rail in a dispute involving a $3 billion public–private partnership and represented NSW Police in a multimillion-dollar claim brought by software company Micro Focus.

G+T has long positioned itself at the forefront of discussions about ADR, hosting a forum co-sponsored by Lawyers Weekly on the future of ADR in Australia in 2012.

Panellists at that discussion included Colleen, NSW chief justice Tom Bathurst and Craig Pudig, the head of litigation at the Macquarie Group.

“[G+T] was the only applicant to provide detailed evidence of its commitment to, and expertise in, ADR,” said Dr Rosemary Howell.

Holding all the aces