Home>
NEWS>
The power of more than one

The power of more than one 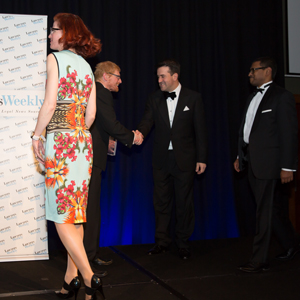 Chances are, when looking around the negotiating table of a major transaction, Herbert Smith Freehills will have a seat.

“We really pride ourselves on M&A and we are loving this market, as no doubt are the other M&A teams in this room tonight,” said partner Rebecca Maslen-Stannage (pictured below left) in accepting the Award.

HSF has taken advantage of a more bullish M&A market over the past 12 months.

Key deals the firm has worked on include advising the Australian Infrastructure Fund (AIX), managed by Hastings Funds Management, on the sale of all of its assets to the Future Fund for $2 billion and the return of those proceeds to AIX security holders.

“I appreciated the high quality, pragmatic advice that HSF provided us on sometimes complex issues in the transaction,” said Sheldon Renkema, the general manager – legal (corporate) at Wesfamers.

Such glowing references from clients were noted by the category judge, Dr Stephen Moss, the chairman of Eaton Capital Partners, in selecting HSF as the winners from what was a notably strong field.

The other finalists included Ashurst, for its role in Westfield Retail Trust’s merger with Westfield Group’s Australian and New Zealand business; Minter Ellison, for the key part it played in the successful restructure and refinancing of the Port of Newcastle, and Norton Rose Fulbright, which advised Baytex on its acquisition of Aurora Oil & Gas.

King & Wood Mallesons had two finalists in this category: its M&A team and the banking and finance lawyers who advised the Australian Securities Exchange on the establishment of the Australian Clearing House for Over-The-Counter Derivatives.

“The Herbert Smith Freehills team stood out from the pack in terms of the number and size of transactions completed, the glowing client commendations and the obvious teamwork and collegiality displayed,” said Dr Moss.

The collegiality referred to by Dr Moss is echoed by Tony Damian, the HSF M&A partner who won this year’s Dealmaker Award.

“If I had a choice between the two, it would be the team award,” he said when talking to Lawyers Weekly about which award he valued more highly.

“Individual awards are nice but it is really great to see the whole team recognised.

“A lot of these matters are real team efforts.”

The power of more than one