Home/
News/
No place for prejudice at NRF 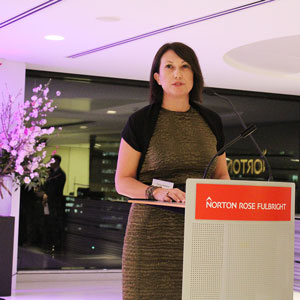 The network was launched in both Melbourne and Sydney. Lawyers Weekly attended the Sydney office event held on 17 September.

NRF started building the LGBTI network about 12 months ago in Australia, following a groundswell of interest from partners and staff.

The Australian launch follows the establishment of similar networks in many of NRF’s overseas offices.

The firm said the network brings together members of the LGBTI community and its supporters to create a culture of inclusion.

She said the launch demonstrated the firm’s commitment to providing an environment in which employees feel comfortable being themselves, irrespective of their sexual orientation or gender identity.

“There’s a great body of evidence that if people bring their whole self to work, they are more engaged and more productive and they lead much healthier and happier lives.

“That’s something that we want for every Norton Rose Fulbright employee. It’s incredibly important to us.”

She said that while NRF gave network members the option of remaining anonymous, not a single member had chosen this option.

“I’m incredibly proud to say that all of our members are open and public and I think that’s a wonderful endorsement of the culture of our firm.”

The guest speaker at the event was CEO and managing director of SBS Michael Ebeid.

He is a member of the LGBTI community and is well known for championing the LGBTI cause within his own organisation.

SBS broadcasted the Mardi Gras for the first time this year under his leadership.

Drawing on his own experience, Ebeid said it only takes a single comment or a throw-away joke by a colleague to make someone feel excluded at work.

He said diversity on its own would not create strong business outcomes and that actively shaping a supportive culture was equally important.

“For me, creating a culture of inclusion is all about allowing people to be their best – respect them for who they are.”

He commended NRF for its new network, saying, “Recognising and celebrating diversity in business settings like this one tonight is exactly the right initiative … and it is a perfect example of how to achieve that inclusive culture.

“It sends a message to the workforce saying, ‘Our organisation is comfortable with this. You can be yourself at work’.”