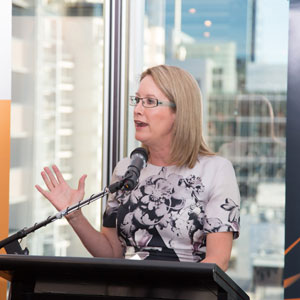 Australia’s sex discrimination commissioner has said it is “illogical” to rely solely on women to achieve gender equality.

Australia’s sex discrimination commissioner has said it is “illogical” to rely solely on women to achieve gender equality.

“By and large women don’t hold the levers of power, so to ask women to promote change is never going to be enough,” she said.

Broderick argued that the struggle for gender equality should not be viewed as a “battle of the sexes” where women win and men lose.

“We all sleep under the same stars, we all want similar things for our life … in more gender-equal societies, everyone wins.”

She said it was fantastic to hear men speaking up about the low representation of women in decision-making roles.

The Lucy Program pairs young women with senior women in law firms, banks and professional services firms who act as their mentors.

Through the program, students are given a backstage view of professional life by shadowing their mentor at work.

The program is designed to inspire students to pursue employment and leadership opportunities in the corporate and public sectors.

“My future looks so much brighter than I thought … [The Lucy Program] has actually changed my life,” said graduate Caroline Cheung, a commerce and science student at the University of Sydney. 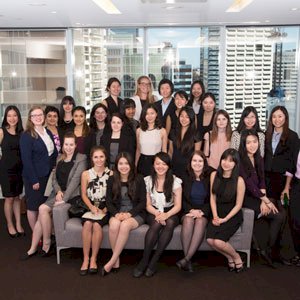 Graduate Estia Foo, a communications and law student from the University of Western Sydney, said the program not only taught her how to network, but what to do after networking events to firmly establish a contact.

Another Lucy Program graduate, Georgia Murphy-Haste, who is a juris doctor student at the University of Sydney, said she was relieved to find that work/life balance was possible within corporate law.

Broderick and the NSW Office for Women's Policy were instrumental in the creation of the program, which now operates across seven universities.

“This [program is] about connecting young women to opportunities, helping them get clarity about what they wanted in their career.”

Broderick said Lucy, the woman the program was named after, was an example of a graduate who had benefited from mentorship opportunities and had “gone on to do great things”. Lucy was in the audience at the graduation.

“[The Lucy Program] has sent hundreds and hundreds of women on their way into really terrific careers,” Broderick added.

No more jocks in frocks

There are more women in positions of power than ever before, but we still do not have a “critical mass” of female decision makers in Australia, according to Broderick.

“When I was going through university there were few female role models and … a real absence of women at the top,” she said.

“Many of the women that you did find at the top were more like the men-in-skirts type, what I now call the jock in a frock.”

She said female leaders in those days often felt that building a strong career meant giving up their identity as someone with caring responsibilities.

Broderick said that everyone will benefit once men and women can say freely at work: “This is who I am. I am somebody with caring responsibility and that’s what I care about”.

“I am a commissioner but I’m also a mum; I’m a sister, I’m a daughter, I’m a wife and I don’t apologise that that is who I am,” she said.

Broderick said mentors can help shape the future by being frank with their mentees about the choices and sacrifices they have made in their professional and personal lives.