Holding open the door of opportunity 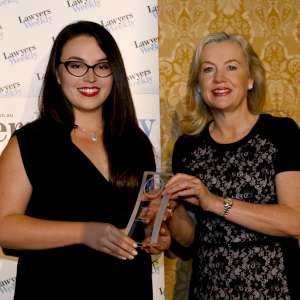 An accomplished law student recounted the words of lawyer and First Lady of the United States, Michelle Obama, in describing the collegiality among women in the legal profession.

Deborah White, who is studying at the University of Sydney while working as a legal advisor at National Australia Bank (NAB), was the winner of the Law Student Award at this year’s Lawyers Weekly Women in Law Awards.

At the presentation ceremony held in Melbourne on 17 October, Deborah paraphrased a few lines from Michelle Obama’s 2012 Convention Speech.

“When you walk through the doorway of opportunity, you do not slam it shut behind you, you reach back and you hold it open for others so they also have the opportunity to succeed,” she said, adding that the quote embodied the spirit of the Women in Law Awards.

“I think it’s truly inspiring that we [women] share this common commitment to achieving equal opportunity in our workplace and making a positive impact on the legal profession.”

One of the ways Deborah holds the “door of opportunity” open for others is by giving her time to community and social justice initiatives, such as the United Nations Youth Association. As vice-president of the association, Deborah organises events across Sydney and regional NSW to engage high school students with international affairs and human rights.

She has also generously supported lawyers in Mongolia while working for the Mongolian Ministry of Justice in Ulaanbaatar. Her responsibilities included assisting local practitioners with the preparation of contracts between Australian companies and the Mongolian government.

“Whilst living with a nomadic family in the Gobi Desert, I gained valuable insight into a completely alternate conception of legal rights. I hope to return to Ulaanbaatar in the future to assist with law reform developments in Mongolia,” Deborah wrote in her submission.

Lawyers Weekly editor Justin Whealing said Deborah’s combination of “academic excellence with an enquiring mind that knows no geographic boundaries” makes her a worthy recipient of the Law Student Award.

Strong in theory and in practice

Deborah has consistently been among the top performers in the Bachelor of Laws / Bachelor of International & Global Studies course at the University of Sydney.

She was rewarded for her academic excellence with a Merit Scholarship for Outstanding Academic and Extra-Curricular Achievement. She also gained a spot in a selective law course on Advanced Obligations and Remedies at Cambridge University, where she achieved a Distinction.

Deborah’s commitment to achieving high grades is balanced by the practical experience she gains as a corporate, banking and property law adviser at NAB.

Her job involves liaising with the bank’s interstate legal departments to standardise procedures for reviewing trust deeds, and advising NAB’s Hong Kong and Singapore offices on the registration of property interests in NSW.

Next year, Deborah will make the move to private practice, having recently accepted a graduate position at HWL Ebsworth.

Holding open the door of opportunity