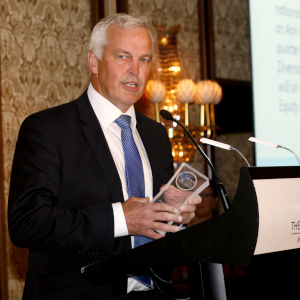 The head of Maurice Blackburn paid tribute to the women who have made the firm one of the most gender-diverse in the country.

The CEO admitted he could not take credit for the success of the firm’s diversity initiatives.

“It goes without saying that I’ve had nothing to do with these achievements other than watching them happen,” he said, and asked the women at his table to be upstanding.

“These ladies have created what is accepted inside our firm; I’m accepting this on behalf of a lot of different people whose shoulders I’m standing on now,” he added.

Seventy-seven per cent of Maurice Blackburn’s staff is female, and women make up around 44 per cent of the firm’s partnership.

The high number of female partners is due, in part, to the efforts of the firm’s Women’s Law Section (WLS). Through WLS, Maurice Blackburn provides clients with the option of choosing a female lawyer, sponsors women-focused events and runs internal and external mentoring programs for women.

“Walk into any Maurice Blackburn office around the country and you will see how they live and breathe diversity every day,” he said.

The prestigious award was judged by Whealing’s predecessor, Angela Priestley, who is currently editor of Women’s Agenda.

All of the finalists offer a range of flexible work options; however, what sets Maurice Blackburn apart is the high percentage of lawyers who actually work flexibly.

Around 25 to 30 per cent of the firm’s employees are under some form of flexible arrangement, whether it be part-time hours, job sharing or work from home days.

The firm has a Cultural Diversity Committee, which has developed a Reconciliation Action Plan that, among other priorities, aims to increase employment opportunities for indigenous Australians. The committee is also behind an internal staff guide on religious and spiritual diversity.

More recently, the firm launched an LGBTI (Lesbian, Gay, Bisexual, Transgender and Intersex) Network. The network’s objectives, which have been published internally, include ensuring LGBTI employees are supported to come out in the workplace if they choose to do so.