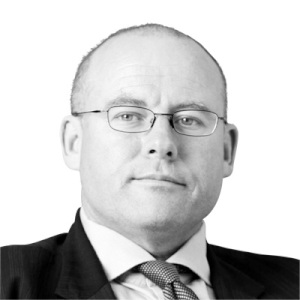 King & Wood Mallesons partner John Canning spoke openly about his battle with bipolar disorder and how to address the legal profession’s depression problem at a function in Sydney last week.

Canning (pictured), a finance partner at KWM, was diagnosed with bipolar disorder in 2008.

He was invited to share his experience of living with mental illness at a Women Lawyers Association of NSW breakfast held at the Sydney office of McCullough Robertson on 19 November.

Canning told attendees that the two years following his diagnosis were a “black phase” in his personal and professional life. He was put on medication to manage mood swings that would range from manic highs to depressive lows.

Despite receiving excellent professional care, Canning said it took years to overcome his fear of being stigmatised for having a mental illness.

“My biggest hurdle in all of this was my own view about stigma and prejudice and what people thought of me,” he explained.

Canning eventually shook off this fear by opening up to family and colleagues, and building a support network around him.

He also developed a “resilience routine” that helps him manage his condition while meeting the demands of a partnership position in a global law firm.

This routine includes regular appointments with mental health professionals, a healthy diet and exercise at least three times a week.

Canning has also instituted “non-negotiable times” when he is unavailable to work. He explained that it is widely known within the firm that every Monday and Wednesday between 5.30pm to 8.30pm Canning does a class at the gym and has dinner with his wife.

He encourages members of his team to set their own non-negotiable times, a practice that he believes promotes psychological wellbeing.

“People realise we’re not machines, we want to work in a happy environment and work effectively with each other,” he said.

The founder of the Tristan Jepson Memorial Foundation (TJMF), Marie Jepson, was among the guests at Canning’s presentation.

TJMF recently released guidelines that aim to improve the psychological health and wellbeing of legal professionals.

Of the 13 recommendations in the guidelines, Canning nominated organisational culture, clear leadership and expectations, workload management, balance and psychological protection as the five most important.

For law firms, specifically, he stressed the importance of shifting organisational culture to one that is more open and accepting of mental illness.

“Culture change is very important – you need to have an environment where you can … speak up without fear of prejudice and stigma,” he explained.

Another attendee, McCullough Robertson’s chairman of partners, Dominic McGann, said he believes that culture change within law firms must be driven by the partnership.

“It is important that the conversation occurs across the whole of the firm, but the particular courage is supplied by the leadership of the firm to affect the change,” he commented.

“You are more likely to alter the paradigm if that occurs.”

Canning is doing his part to drive change within KWM, which is a signatory to the TJMF guidelines. He recently spearheaded a Wellbeing Officer program that has received strong support from employees.

He admitted, however, that KWM and other TJMF signatories are a long way off achieving a ‘best practice’ organisational culture, with future generations more likely to benefit from current efforts to implement the guidelines.

In addition to driving internal programs, Canning plans to continue to speak publicly about his struggle with bipolar disorder in a bid to ease the stigma associated with mental illness.

Since becoming a presenter for the Black Dog Institute, an organisation that aims to diagnose, treat and prevent depression and bipolar disorder, he realised that “people crave information about mental illness”.