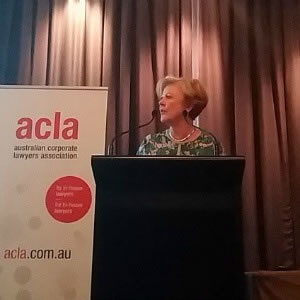 The president of the Australian Human Rights Commission (AHRC) has said that in-house counsel can no longer remain indifferent to the ethical implications of their legal advice.

“In-house counsel have a wider role: they have a duty to their client and their company but it is a duty trumped always by the higher duty of the rule of law and to act in an ethical way,” said Professor Gillian Triggs (pictured).

During her keynote address at the Australian Corporate Lawyers Association’s (ACLA’s) Corporate Counsel Day on March 4, Professor Triggs said the role of in-house counsel has evolved beyond a purely legal function.

“[Corporate and in-house counsel] have become the moral conscience of the company or firm or government body for which they are working," she said.

“Today, in-house counsel often … sit at the right hand of their CEOs. They play a strong and necessary independent role like a moral compass guiding the institution towards ethical behaviour along with wealth creation for shareholders."

In-house counsel have a responsibility not only to determine whether an action is strictly legal, but whether it will lead to an ethical outcome in the wider community, according to Professor Triggs.

“How is the public interest best served by this company’s behaviour? What are the reputational risks to the company if it insists on its technical legal rights?” are questions that in-house counsel should be asking, she said.

Professor Triggs spoke about the lack of community consultation over Kakadu National Park uranium mining and the human rights concerns over the Asian Development Bank’s Cambodia railway project as examples of the dangers of failing to go “beyond the black letter of the law” to look at the broad social implications of corporate activities.

She also spoke about her experience in becoming the director of the British Institute of International and Comparative Law two years after it legally (but perhaps unwisely) accepted donations from a cigarette company, and mentioned her work in relation to the poisoning of the Fly River in Papua New Guinea by BHP Billiton, which destroyed fishing and other rights of locals.

Bound by the code

The new code of conduct will come into effect in July 2015 across New South Wales and Victoria.

“I’m really surprised and very pleased that these rules require solicitors, and obviously, in-house counsel, to meet what I describe as some of the basic and core human rights,” she said.

Professor Triggs said draft rule 42, in particular, was a huge step forward. The rule reads, “A solicitor must not in the course of practice engage in conduct that constitutes discrimination, sexual harassment or workplace bullying.”