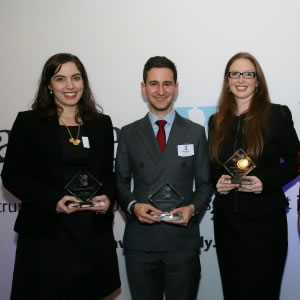 As the only finalist from South Australia, Paul Gordon from NDA Law was thrilled to take home the Lawyers Weekly 30 Under 30 Intellectual Property award.

“I’m really excited to be included in the list along with some of the most amazing young lawyers around the country – it’s such an honour,” Mr Gordon (pictured centre) said, following the awards ceremony in Sydney on 5 June.

He only recently started at NDA Law and says his primary motivation in joining the firm was to address the “major failings” of larger law firms.  In his submission, Mr Gordon criticises time-based billing models for discouraging efficiency and questions the “general hesitance to have a collaborative and interactive relationship with clients”.

In his new role, Mr Gordon is focusing on value-based billing and ‘agile project management’, which promotes ownership of projects by clients by engaging clients in review processes.

“[Mr Gordon] is an example of the incredible young leadership talent we have coming up in South Australia,” said managing director of NDA Law Andrea Michaels.

“He works tirelessly to progress the legal profession and he’s an incredible asset to the NDA team and our clients.”

Another winner of the IP award, Jessica Norgard (pictured right) from Ashurst, was described by referee barrister Justine Beaumont as a “proactive” and “diligent” leader.

Ms Norgard said she feels lucky to have been involved in landmark litigations that have shaped the future of IP law.

“As part of the Samsung Electronics v Apple Inc litigation team, I was at the forefront of technology patent litigation in Australia,” she wrote in her application.

Ms Norgard is also the co-editor of the publication IT, Communications and Media Update, which is distributed across the Ashurst network. She is a member of the Ashurst Sydney Womens’ Mentoring Committee, facilitates an internal mentoring program and is deeply committed to making a pro bono contribution.

King & Wood Mallesons’ Anna Spies (pictured left) was the final winner in the IP category, out of 12 finalists.

Vice president and assistant general counsel at Revlon, Alexandra Gerber, described Ms Spies as “dedicated, tireless and completely devoted to the cause”.

“She has the most uncanny, encyclopaedic knowledge of every fact, argument, evidence, testimony,” Ms Gerber said.

Ms Spies works in the dispute resolution team, which covers a range of areas from copyright, advertising and social media through to trade marks and patents.

Ms Spies said she is often given a high level of responsibility by partners in running matters and was recently put in charge of the day-to-day carriage of a trial.