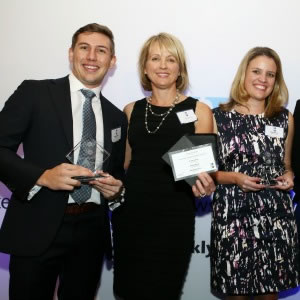 Lawyers Weekly 30 Under 30 Dispute Resolution winner Diana Biscoe is the second lawyer at her firm to take home the prize in the past two years.

Ms Biscoe (pictured right) joins Webb Henderson’s Tom Bridges, who was a winner in this category in 2014.

Speaking to Lawyers Weekly at an event in Sydney on 5 June, Ms Biscoe said she was “very surprised and very excited” to be recognised as one of the top lawyers under the age of 30 in Australia.

“It’s been a lovely night and meeting the other nominees has been almost the best part,” she said.

Her advice to younger lawyers is to “say yes to every opportunity you ever have”.

”The more you do as a junior lawyer, the more opportunities you will see and the more quickly you will progress,” she said.

Ms Biscoe moved from Baker & McKenzie to Webb Henderson two-and-a-half years ago to take a step up in her career. Webb Henderson is a boutique firm with about 25 lawyers in its Sydney, Singapore and Auckland offices.

Ms Biscoe was one of the lead lawyers acting for the ACCC in cartel proceedings in the Federal Court and has also taken the lead for KFC in a dispute with a major franchisee.

“As a core member of a small and busy team I have high levels of responsibility and visibility on substantial matters,” she said.

Partner Andrew Christopher provided a glowing reference for Ms Biscoe, writing, “Diana is undoubtedly a rising star and one of the most naturally gifted and versatile young lawyers I have encountered in almost 25 years of practice.”

Winner Alexandra Kirby from DibbsBarker is also no stranger to responsibility. She recently acted in relation to inquiries before the Independent Commission Against Corruption and successfully negotiated a dispute between a principal of a large professional services firm and the national regulator in an appeal to the Administrative Appeals Tribunal.

Andrew Bass (pictured left) from Minter Ellison is the final winner in the dispute resolution category. Mr Bass spent the early part of his career as a television news journalist, but has since moved on to tackle litigation.

His work in relation to a large class action concerning live cattle exports and Federal Court proceedings involving a supertrawler earned him a description as a “dedicated lawyer” with strong interpersonal and leadership skills.