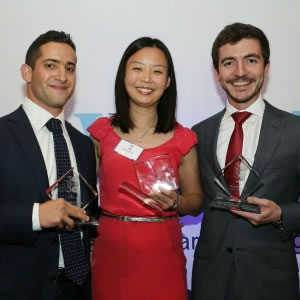 ABL’s Gavin Hammerschlag (pictured left) was recognised for his work on a transformative acquisition by an ASX-listed shoe retailer, as well as advising on Slater and Gordon’s $1.2 billion acquisition of Quindell’s professional services division.

Mr Hammerschlag is also drafting a submission on behalf of ABL to ASIC and has had five case summaries published in Butterworths Corporations Law Bulletin.

He believes graduate recruitment in Sydney is in need of reform.

“By increasing the number of clerkships available, not only will candidates be advantaged by the increased opportunity for them to secure a graduate position, but law firms would also be rewarded by gaining access to a larger pool of talent to select as graduates.”

Of the 12 finalists in the M&A category, seven came from global law firms.

However, Michael Compton (pictured right) from Herbert Smith Freehills was the only lawyer from an international to win in the M&A division on the night.

Mr Compton advised on a transaction between Seven Group Holdings and Nexus Energy, participating in consultations with regulators, instructing counsel and liaising with stakeholders.

In 2012, he was also appointed a member of the team advising Freehills on its merger with Herbert Smith.

Ms How advised on the acquisition and subsequent public float of Dick Smith in 2012, described as the “quickest and most successful private equity turnaround in Australian history.”