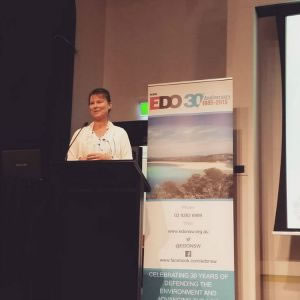 The refreshing 'can do’ attitude of Marjan Minnesma goes a long way to explaining a momentous victory in the Dutch courts last month.

Ms Minnesma (pictured), director of the Urgenda Foundation, interrupted her holiday to deliver talks around Australia.

Urgenda (an NGO whose name combines the words “urgent” and “agenda”) made history in June when the District Court of The Hague ruled that the Dutch Government must reduce greenhouse gas emissions by at least 25 per cent of 1990 levels by 2020.

The court found the government’s present target of 14-17 per cent by 2020 was unlawfully negligent.

Ms Minnesma said the case was viewed by the Dutch press as a publicity stunt and no one really believed Urgenda, together with the 886 plaintiffs they were representing, could actually win.

“The reaction of most lawyers was, 'this is not possible’,” said Ms Minnesma, speaking at an event hosted by EDO NSW in Sydney this week.

Urgenda and its supporters marched to the courts to launch the case in November 2013 after engaging in polite correspondence with the government, as is required by Dutch law before civil proceedings.

“[We were essentially] just putting papers on a desk, but we were there with hundreds of people – children, balloons, everything,” Ms Minnesma said. “We had a lot of fun.”

Urgenda’s case was led by Roger Cox, a partner at the Dutch law firm Paulussen Advocaten and the author of Revolution Justified, which lays out the legal thinking behind the case.

The first meeting of the two parties took place in April this year.On June 24 the court was again packed with hundreds of people and more than 50 journalists to hear the verdict, which was handed down in Urgenda's favour.

“We were all dressed up in white,” Ms Minnesma said. “The people of the state were dressed all in black, so it was very easy to see who was good and who was bad,” she laughed.

“What I found very special was that the court had decided to translate everything in English,” said Ms Minnesma.

Holding the government to its own standards

The most remarkable aspect of this case is its relative simplicity from a legal perspective, according to Ms Minnesma.

“It is important for people to realise that this is civil law,” she said. “This is not environmental law or international law.”

The way the case was constructed meant that the legal team could draw on other parts of the law indirectly, while focusing on the government's duty of care of government.

“In duty of care there is a so-called ‘open norm’,” said Ms Minnesma.

Open norm allows duty of care to change over time, according to the standards of the era. This is known as the ‘reflex effect’.

It allows the court to judge action (or inaction) as lawful based on the various principles, treaties and bodies of knowledge that the government has already recognised.

“[The open norms] would be different in the 1800s than they would be now – I even think 15 years ago it would be difficult for us to fight this case,” said Ms Minnesma.

While the state has a lot of discretionary power, there is a minimum level of care that must be met to protect citizens, she said: “A government cannot do everything it likes.”

This minimum obligation is determined by what the government has already established itself, through treaties and policies.

“The judge is not inventing policies,” Ms Minnesma said. “It is only looking at what the government has declared itself up to now, what have they signed.”

The Netherlands is a signatory of the United Nations Framework Convention on Climate Change (UNFCCC), which produces a scientific report every five or seven years.

“The report is not from scientists alone,” Ms Minnesma said. “In the end, 195 countries sign it and say, ‘this is the body of knowledge that we acknowledge’.”

As the Dutch Government did not dispute the science in the most recent report in the case, the judge concluded that this was part of the accepted norms.

“The judge simply said 'well, you should now live up to your own principles. That is part of your duty of care’,” said Ms Minnesma.

Ms Minnesma said the arguments of the state were not very convincing: "I think the lawyers were not really very good. We were happy about that."

Ms Minnesma recalled the joyous moment that erupted in the courtroom when the decision was read out.

“There was yelling and crying and hugging and it was really a very strange court.

“[The news travelled] within an hour all over the world. I was surprised how quickly it went.

“There were so many people that called us to say they were crying in front of the TV.”

Since this “case for hope”, the media in The Netherlands have stopped focusing on whether climate change is real or not, she continued.

“Suddenly, climate change is a fact … and we are finally now acting on the solutions.”

The government has been ordered to pay Urgenda’s legal bills, estimated at €13,522, and (so long as an appeal is unsuccessful) the government will have to pay large fines to the NGO if it does not comply with the court ruling.