ICC should address crimes against the environment: Freeland 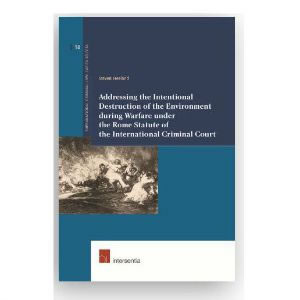 Intentional destruction of the environment during times of war is not adequately addressed by international law, says an academic at the University of Western Sydney.

In a book to be launched this month, Steven Freeland, a professor of international law, proposes that a new crime be included in the Rome Statute of the International Criminal Court (ICC).

This crime should create greater deterrents and accountability for rampant and excessive environmental damage during armed conflict.

“Those who engage in warfare have to recognise that, of course, we must always take every necessary action to minimise damage and suffering to human beings, but that in no way means that the environment is open slather,” Professor Freeland said.

The book – to be launched at an event hosted by King & Wood Mallesons on 17 August – discusses historical crimes against the environment that fall outside the ICC’s current parameters.

For instance, the herbicide Agent Orange, used by the US to destroy forests and thus expose guerrilla fighters during the war in Vietnam, devastated vast areas of the countryside and caused severe, long-term health problems among villagers.

Another case occurred during the Gulf War in 1991, when Iraqis set alight around 800 oil wells in Kuwait and poured about 4 million barrels of oil into the gulf as part of a scorched earth policy.

The draining of the marshes in southern Iraq by the Saddam Hussein regime between 1992 and 1993 also radically altered the environment, causing a massive decline in the population living there.

Under current international treaties, there are few avenues for redress when armed conflict results in this kind of environmental destruction, according to Professor Freeland.

He argues that the ICC is the appropriate venue in which to hold individuals to account for these crimes.

The Rome Statute currently deals with four main crimes: genocide, crimes against humanity, war crimes and the crime of aggression, but does not fully address crimes against the environment.

“The Rome Statute of the ICC does have an existing war crime that refers to damage to the environment but [it] is drafted in such a way that it is virtually impossible for anyone to be convicted of breaching that war crime because the thresholds of environmental damage [and] the mental element is so high,” he said.

'War crimes' are serious violations of the customs and laws applicable to armed conflicts when they are committed as part of a plan or policy or on a large scale.

Article 8(2)(b)(iv) of the Rome Statute currently defines one kind of war crime as “Intentionally launching an attack in the knowledge that such attack will cause ... widespread, long-term and severe damage to the natural environment which would be clearly excessive in relation to the concrete and direct overall military advantage anticipated".

However, no one has ever been tried or convicted of war crimes specifically for destroying the natural environment.

On the other hand, cultural heritage property  – such as what is being threatened in Iraq and Syria – is well protected in the Rome Statute. Individuals were convicted for war crimes for the destruction of this kind of property during the Yugoslav Tribunal.

Professor Freeland's book includes a draft ‘crime against the environment’, which he believes will hold people to account for environmental destruction that “shock[s] the conscience of humanity”.

Professor Freeland said he drew on well-established definitions of terms such as ‘armed conflict’ and ‘intent’ in his suggested amendment.

“I tried to draft this crime in a way that is consistent with what we are doing already,” he said.

If states party to the Rome Statute agree to the change, the crime would not be applied retrospectively, he added.

The ICC is not the appropriate venue to address damage that occurs as a result of negligence, such as the Exxon Valdez oil spill, or as a result of government inaction, such as climate change, according to Professor Freeland.

“International criminal law is one very useful tool to address damage to the environment but its usefulness really is largely directed towards fighting and armed conflict,” he said.

“There are many other important environmental issues that need to be addressed by international law more rigorously but many of those others wouldn't fit into the mandate purpose and intention of the ICC.”

ICC should address crimes against the environment: Freeland