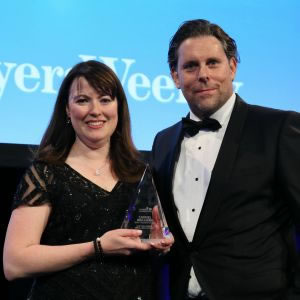 This year the Australian Law Awards had nine categories devoted to celebrating the success of individuals throughout all stages of their careers, from law students to managing partners.

The winners of the nine individual categories were also all automatically up for the top prize of the night, the Lawyers Weekly Excellence award, which went to General Counsel of the Year winner Carmel Mulhern from Telstra Corporation Limited.

In her role, Ms Mulhern (pictured) manages 200 lawyers located in Asia, Australia, Canada, the UK and the US.

One of the judges said: “Carmel has demonstrated her exceptional skills in all aspects of her role as legal and commercial leader within Telstra, and also her role as team leader and visionary for not just her team but the corporate culture within her organisation.”

They continued: “There is much talk about promotion of women within the corporate and legal spheres. Carmel is spearheading her organisation to actually create the opportunities for women to succeed.”

The Managing Partner of the Year award went to Tony Macvean from Hall & Wilcox for his outstanding effort over the last 12 months and the substantial growth and culture of innovation that he created at Hall & Wilcox.

One judge described Mr Macvean as an “excellent leader who has driven improvement in all aspects of the firm.”

Partner of the Year went to Berkeley Cox from King & Wood Mallesons, whose fellow partners submitted an application on his behalf without him knowing.

“The nomination being made by the partners without the nominee's knowledge demonstrates his influence on firm culture and the respect in which he is held,” one judge said.

Mr Cox’s co-workers spoke of his clear understanding of the difference between management and leadership and the way that he leads by example to create a very motivated passionate and thriving team.

“It is very rare – unheard of – for all 25 partners of a practice area to support an awards submission. This is testament to Berkeley Cox's standing among fellow partners,” another judge said.

This year, four out of the 10 finalists for the Dealmaker of the Year award hailed from Herbert Smith Freehills, and partner Philippa Stone took out the prize.

Young up-and-comers and mid-level lawyers were also recognised throughout the evening in other awards.

The Young Gun of the Year award went to Samuel Kang from Gilbert + Tobin, who was described as ‘a proactive lawyer with lots of ideas’, ‘humble’ and ‘very much a team player’.

Benjamin Tomasi of University of Western Australia took home the Law Student of the Year award, and was described by a judge as being: "A brilliant achiever, with the promise of a star of the future, and one who will be conscious of the downtrodden in society.”

The full list of Australian Law Award winners can be found here.