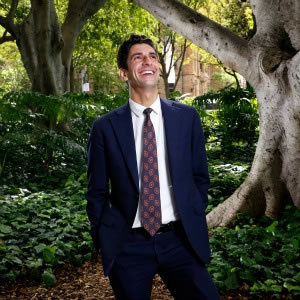 Four out of the six winners of this year’s Rhodes Scholarship are law students.

Joining this hall of fame this year is Harj Narulla (pictured), a law graduate from UNSW.

“I’m really excited and grateful for the opportunity,” he said.

Mr Narulla is keenly interested in Indigenous issues. At UNSW he volunteered for mentoring programs and worked with the Aurora Project and the Indigenous Law Centre.

He plans to study comparative constitutional law models for the recognition of Indigenous peoples at Oxford and hopes to work for the Aboriginal Legal Service in the future.

“Harj is a great example. A brilliant student, but also someone who made big contributions to his world while a student,” said Professor David Dixon, the dean of the UNSW law faculty.

Professor Dixon said the interests of law students in studying overseas is “reflective of the changing nature of law”, which is no longer “just a domestic discipline”.