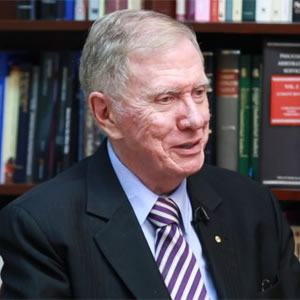 The AALA – which was founded in Victoria in 2013 – opened its first interstate chapter at an event at Baker & McKenzie’s Sydney office on Monday night.

Speaking at the event, Mr Kirby emphasised the “shocking and surprising” extent to which Asian-Australian lawyers are under-represented in the profession.

Statistics collected by the AALA earlier this year showed that while people with Asian backgrounds make up 9.6 per cent of the Australian population, they account for just 3.3 per cent of partners at major firms.

Urging the crowd to “remember these figures”, Mr Kirby suggested the AALA’s research was the first step to changing the status quo.

“You can only build the future on the basis of the truth of the present,” he said.

He compared the challenges facing Asian-Australian lawyers to those of LGBTI people in the profession, having previously spoken candidly about his own struggles due to his sexuality.

“[We were] people who were often silenced, who could hide their identity and that’s what you were expected to do,” he said.

“A point was reached where the Rubicon was crossed and that was no longer a tolerable situation.”

While the profession as a whole must actively work to improve its ethnic diversity, Mr Kirby emphasised the need for Asian-Australians to fight for their “dignity and their rights”.

“Nothing happens in our world unless people stand up for themselves,” he said.

AALA president Reynah Tang, who also spoke at the event, said he was inspired to form the organisation after serving as the Law Institute of Victoria president.

“It struck me as somewhat remarkable that I was the first person of Asian heritage to do so,” he said.

Since its formation in 2013, the AALA has attracted widespread support in Victoria and voted to include interstate committees in its constitution earlier this year.

The NSW chapter of the organisation will be lead by Kingsley Liu, a lawyer at The People’s Solicitors.