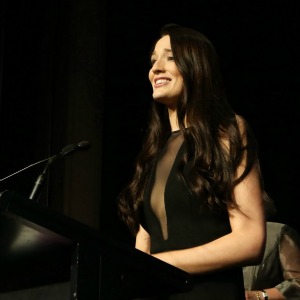 This year’s Women in Law Awards placed young lawyers in the spotlight.

TressCox’s Elizabeth Aitken (pictured) won the Young Gun of the Year Award, presented by Leo Cussen, in recognition of her broader community work and commitment to social justice.

“I didn’t really want to be a lawyer,” she told Lawyers Weekly at the black tie awards event in Melbourne last week.

"Not until my very last year of law school when I discovered that employment law was fascinating and that it would be a good idea to write 10,000 words on sexual harassment law.

“I think you find your practice area and that’s what draws you in.”

As the organiser of this year’s Victoria Women Lawyers mentoring program, Ms Aitken said giving advice to young lawyers “is sort of my speciality”.

“Some of the things we tried to encourage in young lawyers were to make as many connections as they can in the industry,” she said.

“Connecting as much as possible with practitioners who are in your area of interest is a fantastic idea in those early stages.”

The winner of the inaugural Academic of the Year Award, Cathryn Nolan from RMIT University, shared Ms Aitken’s passion for mentoring.

Her work has a large teaching component, but she has also just started a PhD focusing on how graduates should be trained in the future.

“We are very aware that the profession is being disrupted but we are teaching law exactly as I was taught it,” she said.

Ms Nolan empathised with the “overwhelming” expectations placed on law students. “The reality is there are more and more law graduates all the time, fewer and fewer jobs for them in the traditional sense, they need to think about their futures in a whole different way,” she said.

“But actually they are still the same people and they still have that little voice in the back of their head thinking, ‘I’m faking it and somebody is going to catch me out one day’.”

She said being able to connect with students and guide them through the process of finding “their own beautiful life, their amazing career” is the most rewarding thing about teaching.

The awards also recognised Taylor Macdonald from Western Sydney University as the Law Student of the Year. Ms Macdonald is beginning the graduate program at King & Wood Mallesons in 2016.

The Senior Associate of the Year Award was granted to Elizabeth Hundt Russell from King & Wood Mallesons by e.law International.

“As a mother returning to full-time work in a highly demanding transactional practice, within this field, she stands as a great example to other KWM women that you can do it,” her submission read.