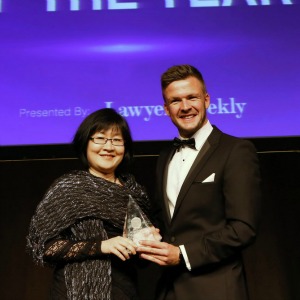 International firms were strongly represented at this year’s Women in Law Awards, with King & Wood Mallesons winning both the dealmaker and the executive award.

Sue Kench, KWM managing partner, was recognised as Executive of the Year for her innovative approach to financial growth and reducing attrition.

One judge said Ms Kench’s initiatives appeared to be creating a workplace that is “less like a traditional law firm” and more like a “centre of excellence”, where learning and development is highly valued.

Another big win for King & Wood Mallesons was in the M&A area, with partner Yuen-Yee Cho receiving the Dealmaker of the Year award.

According to the judges, Ms Cho is a “first-class dealmaker” and an “innovative and original thinker” with strong team skills.

Speaking with Lawyers Weekly at the event on 27 November, Ms Cho said: “I love the adrenaline [of deals].”

She added: “The kinds of deals we do are usually quite unique in a market setting, and it gives me and my team a big buzz.”

She said that picking her own top deal of the year was “a difficult choice amongst many”, but ultimately settled on her work with Affinity Equity Partners on the Virgin Australia Airlines/Velocity Frequent Flyer spin-out.

The Special Counsel of the Year title was awarded to Claire Forster from Norton Rose Fulbright.

“It is very impressive to see a busy commercial lawyer also dedicating time to pro bono projects, with the homeless and with Indigenous communities,” one judge commented.

One of the most competitive categories, the Partner of the Year award, presented by e.law International, was taken out by Colleen Platford from Gilbert + Tobin.

Ms Platford was one of the first two women partners appointed at Gilbert + Tobin, in 1995, and she is now the most senior female litigation partner at the firm. She has been a pioneer of flexible working arrangements at the firm and is currently exploring the tax deductibility of child care costs for all women.

As well as being the firm’s lead partner on a number of large and complex dispute resolution cases in the past year, Ms Platford undertook significant amounts of pro bono work.

“Ms Platford's dispute resolution work in the past year has been of an exceptional standard, resulting in excellent outcomes for her clients,” one judge said. 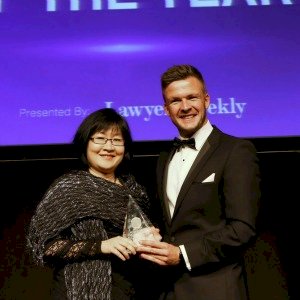