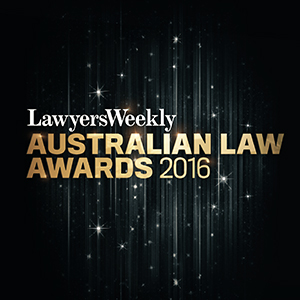 The winners of the 2016 Australian Law Awards have been announced, with several firms taking out top honours.

Almost 800 people were in attendance at this year’s event, which celebrated the achievements of 32 award recipients.

The hotly contested Law Firm of the Year award was given to Gilbert + Tobin.

Lawyers Weekly would like to congratulate all of the finalists and winners on their outstanding achievements over the year.

The winners of the 2016 Australian Law Awards are:

Academic of the Year
Erika Techera
The University of Western Australia

Banking and Finance Team of the Year
King & Wood Mallesons

Energy and Resources Team of the Year
Ashurst

In-house Team of the Year
Brookfield

Property Team of the Year
MinterEllison

Transaction Team of the Year
Ashurst

Innovator of the Year
LegalVision