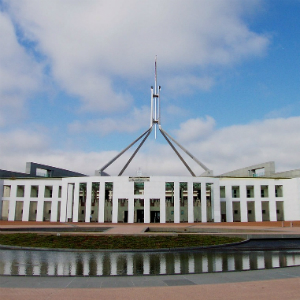 A political storm in the nation’s capital has moved the Attorney-General to dispatch a press release calling the shadow attorney-general “a blatant hypocrite”.

“On 7 October, Mr Dreyfus issued a media release which was heavily critical of legal advice being sought from senior barristers other than the Solicitor-General.

“Yet it was revealed today that Mr Dreyfus as Attorney-General followed the very same practice,” Senator Brandis said.

The exchange of fire from both sides of politics has ramped up in the wake of an unfurling spat over access to Australia’s second law officer, the Commonwealth Solicitor-General.

At issue is a senate direction, tabled by the A-G earlier this year, which some experts believe will hamper the independent status of the statutory office of Solicitor-General.

A Senate legal and constitutional affairs committee is currently conducting an inquiry into the direction.

Solicitor-General Justin Gleeson SC has told the inquiry he was not consulted about the direction, contrary to the A-G’s account.

Mark Dreyfus continues to push for Senator Brandis to resign, arguing that the A-G attempted to “sneak through a shocking and unprecedented change to the Solicitor-General’s role”.

“This [direction] effectively destroyed the independence of the Solicitor-General, as the apolitical second law officer of this country, and was a bald power-grab by Senator Brandis.”

“The Solicitor-General exists in order to be independent of the government of the day, not to be subject to its orders,” Mr Dreyfus said.

Mr Dreyfus has since gone on to suggest that the A-G’s “lies to Parliament” make his position as the nation’s top law officer untenable.

On the eve of last Friday’s Senate committee hearing, the A-G was moved to issue a press release of his own.

In the statement, Senator Brandis quoted an extract from a book about the role of the Solicitor-General, which included an interview with Mr Dreyfus.

The quote reveals that during his tenure as A-G from February to September 2013, Mr Dreyfus sought counsel from barristers other than the Solicitor-General. According to Senator Brandis, this makes Mr Dreyfus' criticism hypocritical.

“When confronted with this glaring inconsistency between his attack on Senator Brandis and his admission that, as Attorney-General, he followed the very same practice, Mr Dreyfus described Senator Brandis’ revelation as 'muck'.

“An unusual, but perhaps accurate, description by Mr Dreyfus of his own words and conduct,” the A-G’s statement read.

Speaking to Lawyers Weekly, the author of the quoted book offered some clarity.

Associate Professor Gabrielle Appleby from the University of NSW said that in her book Mr Dreyfus discussed seeking advice from the Solicitor-General and, on occasion, obtaining additional advice from other barristers on issues of public importance. She confirmed that this same process was followed by a number of other attorneys-general.

That particular practice, however, must not be confused with the current issue at hand, which is the failure to consult the Solicitor-General, the academic said.

“This criticism is different from what Mr Dreyfus explained was his practice, as set out in my book.

“The issue Mr Drefyus originally criticised was that the Attorney-General had broken a century-long tradition when he failed to consult the Solicitor-General on issues of public importance,” Ms Appleby said.

The author of The Role of the Solicitor-General: Negotiating Law, Politics and the Public Interest gave expert evidence to the Senate committee earlier this month.