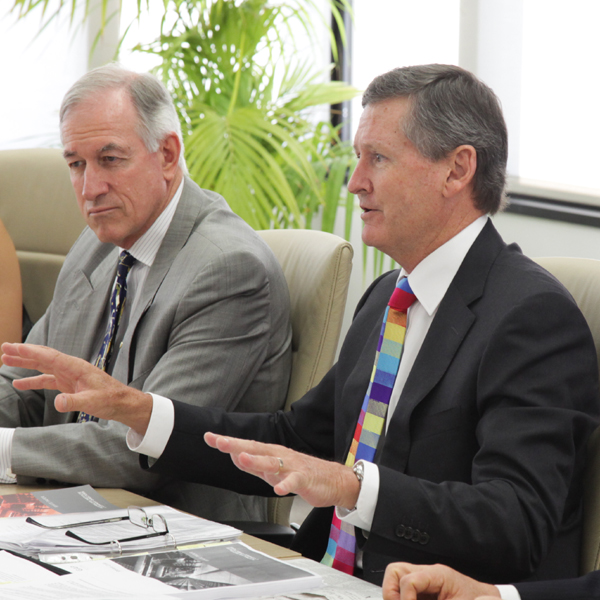 Increased liability laws are “anti-business” and turning Australia’s best potential directors off the job, according to a roundtable of leading lawyers and directors.

The roundtable, hosted yesterday (23 February) by the Australian Institute of Company Directors, aired significant concerns to the director community about overregulation and launched a white paper on the topic, Mind the Expectation Gap, by Steven Cole (pictured right).

Graham Bradley AM (pictured left) , Brian Rayment QC, Professor Bob Baxt AO and Kathleen Farrell were among the attendees who discussed the blurring and misunderstanding of the division of roles and duties between director and management and the stifling effect on business, investment and job creation.

“It is simply not reasonable to expect directors to be familiar with every detail of a company’s operation,” said Cole, adding that directors are spending more time on corporate compliance and conformance and less time on strategy, entrepreneurship, risk management and prudential oversight.

Graham Bradley AM said it was “quite appropriate” for directors to be responsible for ensuring that their own systems, such as for the management of payment of superannuation, were in place, but said it was “totally unrealistic” that they be personally liable for “every single failure” of a company.
“That makes a director a guarantee against any error on the part of company, which is completely out of the real world,” he said.

Bob Baxt slammed the lack of political will for such issues and agreed with Freehills corporate partner Quentin Digby who said that increasing liability laws were a “simplistic and lazy approach to regulation”.

“Unfortunately, this country has now got into a quagmire of parliament deciding, ‘We’re not going to pass laws that force people to go to courts to get their results, we’re going to give the regulator the power to issue the infringement notice’ ... This lazy regulation is endemic and we’ve just got to stop. It’s a critical issue,” said Baxt, adding that companies were paying regulator fines rather than paying twice as much to “hire Freehills to fight it”.

Concerns were also raised in regards to liability and reputation risks which are making Australia’s most skilled and able business leaders reluctant to assume public directorial office.

According to attendees, the administrative “nonsense” that clogs up boardrooms stifles the “stimulating, wealth creating, business building environment” that people look forward to.

“Good people are now sufficiently worried about the risk reward trade off that they will not serve on corporate boards ... I’ve spoke to first-rate people who should be on boards who say, ‘Listed company board? Forget it’,” said John O’Sullivan. “It’s a boring, risky job.”

“With the huge proliferation of not-for-profits (and I serve on many NFP boards) there is almost a level of fear that’s now being created because of the responsibility placed on directors of those organisations,” said McKay.

“It’s actually very hard now to find directors to serve on NFP boards. It is an arduous task because of the blurred lines and confusion around the role of a director of a NFP.”

The roundtable discussed the need to clearly separate the roles of boards, executive management teams and directors (the latter of which there are 2.1 million in Australia) to optimise corporate performance and ensure new market entrants, international competitiveness and increased social and community dividend.

In light of the leadership ballot on Monday next week, Bradley said he would like to see any federal government make three commitments.

“First, don’t make retrospective laws in relation to liability or taxation. Second, don’t deem directors to be criminally liable when they themselves have not been negligent or otherwise culpable in relation to the offense. And third, you don’t reverse the onus of proof.”

Directors argue that government policies such as the Corporations Amendment (Improving Accountability on Director and Executive Remuneration) Act 2011; changes to the tax laws to counter phoenix activities; and the “two strikes” rule to give shareholders greater power to vote out company boards, have achieved little so far, other than costing boards huge time and effort to deal with the legislation.

But that legislation is creating plenty of work for lawyers. “This whole overregulation is giving lawyers a field-day,” said Cole.

“But it’s getting too complex and specialised ... The hazard is that you get very focused in narrow areas of practice and you don’t see the forest. You’re looking at the trees and you miss the forest and therefore you don’t find the correct way through.”

Cole argues that many problems in the business community are met by government simply “putting in legislation” without asking questions about existing regulation and how it is being used.

“There’s no wonder the judges struggle ... and it’s becoming incredibly costly to brief lawyers,” he said.

“Lawyers become very good at understanding what the regulation is, but why is the regulation there in the first place? The regulation is often ill-founded and isn’t curing the issues. Therefore, in the grander scheme of things for that corporation, how are they actually advancing the cause?”