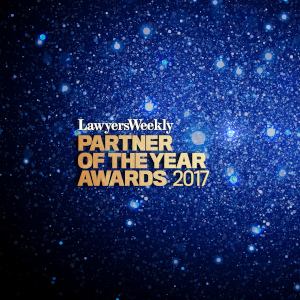 A crowd of over 400 gathered together at Sydney’s The Westin on 28 April to mark the second annual Partner of the Year Awards.

This year’s finalists were an impressive bunch, with judges extremely impressed over the quality of work completed over the past 12 months.

In total, 24 awards were handed out, including the hotly contested Excellence Award – bestowed to the partner who collectively received the highest scores from judges.

Lawyers Weekly would like to thank our sponsors Macquarie Gordon & Co, thedocyard, Law Image, Sheahan Lock Partners, Spike and Momentum Intelligence for their hand in making the night a success.

We would also like to congratulate the winners and finalists of the night – and thank you all for your support.

The winners of the 2017 Partner of the Year Awards are: