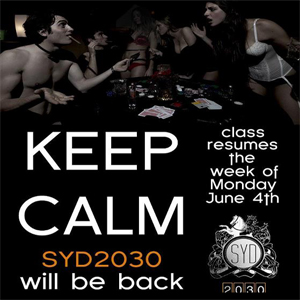 Folklaw knows how devastated you all are that the sixth season of Gossip Girl will be the last, but don’t worry, this 12-part mini web-series may be a replacement.

While Gossip Girl writers have been grasping at straws for plot twists, the University of New South Wales law student, writer, director and star of SYD2030 has been kicking goals.

Tatjana Alexis’ show won Best International Webseries at the LA Film, TV and Webisode Festival, and has just been nominated in the drama category at the International Television Festival.

Alexis said the series will help let the world know how hard it really is to be a law student.

“[It] may evoke the message that law students deal with a lot of s**t, so cut them some slack!” Alexis said.

Each SYD2030 episode is around five to ten minutes long, because clearly that’s all the time law students can afford to take out of their burdened days.

Either that or this is a procrastination tool, particularly handy when writing that property or tax law essay.

While impressed with her creativity and drive amid what Alexis described as “crazy workloads”, Folklaw thinks she may have squeezed in some partying as creative fodder in the online drama.

Suzie Smith, the producer at Cheese on Toast Productions who worked on the web series, said the crew had put their hearts, soul, lives and what little money they had into creating the new online drama over the past year.

“Cheese on Toast Productions is a small but mighty self-funded production company started by five Sydney-based university students all under the age of 24,” said Smith.

You can check out this self-funded Sydney drama with hipster-esque fashion, youthful lawyer sleaze and upcoming Aussie talent at syd2030.com.au or on Facebook at www.facebook.com/SYD2030.