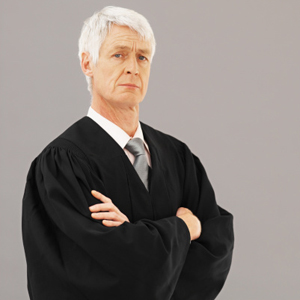 In Folklaw’s experience, a sense of their own importance isn’t something that judges generally lack...

In Folklaw’s experience, a sense of their own importance isn’t something that judges generally lack...

But it seems the identities of their Supreme Court Justices ain’t so important to the majority of the US public.

A recent poll by findlaw.com found that nearly two-thirds of Americans can’t name a single one of their Supreme Court justices – and only one per cent could name all nine sitting on the bench.

Folklaw does think it is a sad reflection on society that a much higher percentage of the American public could probably name all the members of One Direction or the entire cast of Jersey Shore...

Chief Justice John Roberts is the best-known judge, but could still be named by only one in five Americans. Justices Antonin Scalia and Clarence Thomas were named by 16 per cent, Ruth Bader Ginsburg and Sonia Sotomayor by 13 per cent, Anthony Kennedy by 10 per cent, and just five per cent knew who Samuel Alito was.

Elena Kagan and Stephen Bryer were identified by only four and three per cent respectively.

Three per cent? Ouch. Folklaw would hope that at least that many people would know who we are ... and we don’t even get to make any important decisions.

The results of this poll are even more shocking given that the Supreme Court Justices have been in the news Stateside recently with some controversial rulings, including on the Obama administration’s healthcare policy.

But before we start feeling all superior and just dismiss the ‘stupid Americans’, what do we think the results would be if a similar poll was taken here?

With the just-announced appointment of Stephen Gageler as Australia’s newest High Court judge, Folklaw wonders how many of the Australian public would be able to name the seven eminent Justices who sit on that bench.

If the results of our quick-fire office poll are anything to go by then the unfortunate answer is: not a lot!

Folklaw’s unfortunate feeling is that most of the Australian public would be able to name all the judges on The X Factor before they could name one High Court Justice.