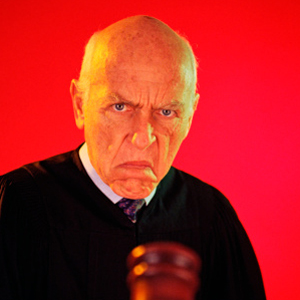 Looks like one judge in the US should perhaps have read his Bible closer and paid heed to the saying “Judge not lest ye be judged”.

Looks like one judge in the US should perhaps have read his Bible closer and paid heed to the saying “Judge not lest ye be judged”.

If the contents of a complaint filed in Texas recently are to be believed, then District Judge Lonnie Cox of the Galveston County Drug Court needs to attend some anger management classes.

The judge allegedly exploded at a defendant in open court and shouted: “This is shit. This kind of bullshit is not what the drug court should be doing,” the Daily Mail reported.

The complaint also alleges the judge told the heavily-pregnant, 22-year-old defendant that she was “worthless” and “not worth the paper and ink the plea agreement was written on”. He then allegedly ripped up the court documents before storming out.

Jeez, drama, drama; someone’s been watching a bit too much Judge Judy...

The outburst was apparently sparked when Cox discovered the seven-month pregnant defendant, Maricelda Marie Aguilar, who was imprisoned on a drugs charge and who he had agreed to allow move from jail to a rehabilitation centre, had missed meetings with her probation officer.

Allegations about the outburst, which Aguilar’s mother claimed was seen by 14 people, are contained in a recusal motion filed by Aguilar’s lawyer.

Cox has refused to recuse himself and the complaint is ongoing.